I’ve had a lot of people asking me what The Opportunities Party’s (TOP) response is to the volley of executive orders issued by Donald Trump in his first week of office. Like many, I guess I have been surprised that he is moving so fast to “honour” the campaign promises he made, many of which seemed outrageous at the time – and of course he seems to have run into legal walls already, trying to ban residents from even returning to the US. Not bad for just one week in office. 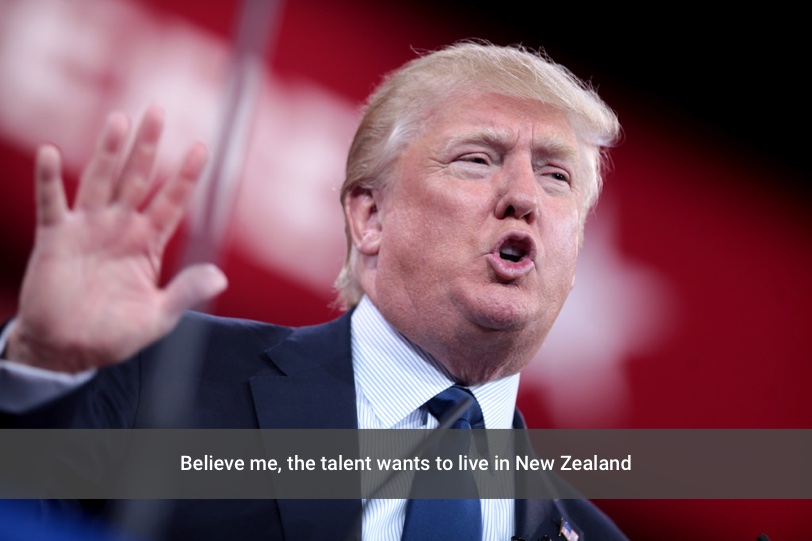 More seriously, like any progressive person I wouldn’t think twice about disagreeing with the regressive and prejudiced policies Trump promotes. Migration, when managed well, is unreservedly a bonus for any country. But migrant profiling, based on what country a migrant hails from, could be seen as purely a political play to incite the basic instincts of fear and bigotry that reside in some of his target audience.

I don’t believe for one moment that is what underlies the Trump dogma. No, Trump is reflecting the fear that has seized America - fear of job loss, fear of mass killings in America, fear of losing sons in silly wars in foreign places, and fear of terrorism from ISIS et al spreading throughout Western democracies (rather than just being in far flung, foreign places like Istanbul etc).

So I suggest it is way, way too simplistic to describe these actions as being driven by bigotry and racism. No, this is the result of the reality that since 9/11 of 2001 America has not “won” its war against terrorism. So he has said “let’s close it down - shut the rest of the world out”. Donald Trump has a similar view on world trade, he feels it has lost America jobs and I expect him to follow a similar isolationist approach in that area.

Like any group, Muslims and Mexicans are incredibly broad cultures that reflect predominantly wonderful people and of course include a few bad apples. Any group of migrants brings positives and negatives with them, but tarring everyone with the same brush is just wrong and it will feed the worst instincts within an American population that is not that long from the days of Ku Klux Klan and other extremism.

Trump might argue that by banning everyone from a certain country he’s really just ensuring the worst don’t enter America. But the loss from banning the innocent will be significant, and the message he’s sending to Americans that it’s okay to attack the innocent all in the name of excluding the guilty, is just horrendous.

To me the more interesting question is now that Trump is showing his hand and we have a taste of the disruption to come, what this means for New Zealand? In my view it presents an opportunity to make our country the place where talent wants to live. That is why Trudeau’s response was so powerful – while it focused on refugees it sent a powerful message to the globe about Canada’s values, that include being open to migrants from all countries. The subtext for economic migrants is clear; if you are good people, you’ll be welcome here.

To those fleeing persecution, terror & war, Canadians will welcome you, regardless of your faith. Diversity is our strength #WelcomeToCanada

Of course any country has a limited capacity to absorb migrants and in New Zealand our view is that we have a moral obligation to refugees and we should set quotas that correspond to our capacity to absorb them, while with economic migrants the criteria should be centred around whether their presence improves the well-being of New Zealanders. Take it as read that the number wanting to come to New Zealand is infinite.

An Opportunity to Trump America

Part of what made America great (in the past) is that it was able to call on the best talent from all around the world. Researcher Richard Florida credits growth in the age of Information Technology with what he calls the 3T’s: Technology, Talent and Tolerance. Simply put, his theory is that tolerance attracts talent, and when combined with technology you tend to get rapid progress; just look at Silicon Valley.

Under Trump that looks to be no longer the case. Instead of taking the best talent, irrespective of where they come from, Trump is desperately trying to make it harder for terrorists. It is a simplistic approach, that risks backfiring. As Britain closes its doors on Europe, Trump is closing America’s doors to the world. By becoming less tolerant societies they will no longer attract the top talent. Trudeau sees that as an opportunity for Canada, and so should we.

Labour and the Greens have condemned Trump’s prejudice, and we agree with their position. Our PM remains silent, presumably because he thinks it is in our best interest to stay on Trump’s good side. Such is the additional weight of being in Office.

My message to our leaders is this. Regardless of your stance on the morality of the Trump card, we should be leaping at this opportunity to reaffirm that New Zealand is open to the best talent from around the world; we remain a tolerant, progressive society.

When we released our TOP Policy #2: Smarter Immigration, most of the focus went on the problems in our immigration system that have been letting in low skilled migrants. However, our policy is to increase our access to international talent and clamp down on low skilled migration. In other words, given New Zealand’s limited capacity to absorb migrants, our immigration policy is about improving the quality of our migrants overall.

What does it mean to be a Kiwi?

As we set out in our migration policy, new citizens (or new New Zealanders) need to be signed up to the Kiwi values and way of life. What are they? Each of us probably has a fair idea, but what do we give to new migrants for them to sign up? This is one reason TOP thinks we need to start developing a Constitution, making it clear what kind of country we want to live in.

We’ll be talking about this more as part of our TOP Policy #4: Democracy Reset.