To watch the Tax event held on 18 Feb 2019 and which is the result of this research, click here.

Most people are worried about the amount of tax that they pay, but that isn’t what we are talking about here. The Opportunities Party doesn’t want to collect more tax overall, we just want to make sure it is collected in a fair and efficient way. Our goal is to use any revenue collected to reduce income taxes

And that is the case with housing in New Zealand. The current Government is focussed on cracking down on investors and speculators. This may be popular, but doesn’t make much sense economically because the biggest tax break actually lies with the “family home” - otherwise known as owner-occupied housing.

The Government’s own Tax Working Group confirmed this in their report on Taxing Capital Income and Wealth: 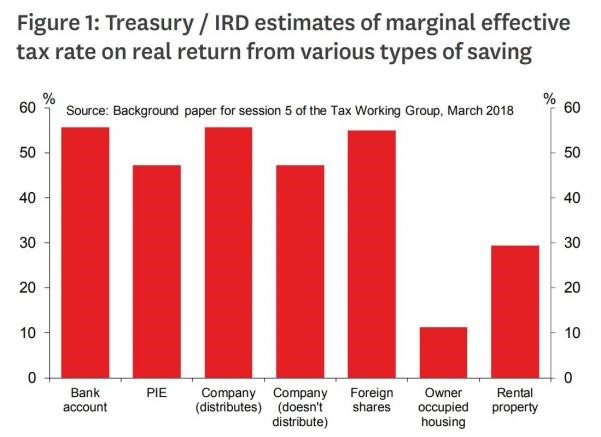 See the low bar? The thing that is taxed way lower than everything else? That is the money that people invest in the family home. Many Kiwis struggle to believe this graph when they first see it. So maybe it would help to look at the history behind it.

A Brief History of Our Tax System

In the 1980s the Labour Government of the time revolutionised our tax system. The idea was to get rid of any tax incentives and loopholes so that tax rates could be lowered as much as possible. This is the mantra of the “broad-base, low-rate” tax system that is parroted by Treasury and IRD officials to this day.

This meant that almost all investments got taxed twice - once when the money for investment was initially earned as income, and again when that investment created a return. That applied to bank deposits, businesses (including shares) and retirement savings. Even the inflation component of returns is taxed, which is why the effective tax rate on most investments in New Zealand is up around 50%.

The one exception was housing and land. The income used to buy these gets taxed, but the returns from being an owner occupier of housing and land aren’t. Effectively when you live in the house you own, you are landlord and tenant and are paying rent to yourself. In most rental situations the landlord pays tax. But in this case, which is called “imputed rental”, no money changes hands so our tax system ignores it.

Housing and land based businesses such as rental property and farming pay tax on the cash returns they get, but not on the capital gain. In all, property based businesses end up paying about half as much tax as other investments. However we need to remember that capital gain happens because of higher expected returns in the future, all of which ideally should be taxed. So in the long run taxing capital gain is really unnecessary double taxation. The problem with property is that not all those future returns are taxed (the imputed rental problem), which can make a Capital Gains Tax attractive for that asset class.

There was talk of introducing a Capital Gains Tax as part of Labour’s reforms in the 1980s. However Labour imploded, National was voted in, and it was all but forgotten. That would have been the time to bring in a Capital Gains Tax (as long as it included the family home), before all the capital gain happened. But now the horse has well and truly bolted. Imputed rental would still not have been taxed, but at least housing affordability would not be as bad as it is now.

What Do Other Countries Do?

The result of this history is that the difference between tax treatment of property and other assets is the greatest in the world. How do other countries deal with this?

A few do something similar to The Opportunities Party proposal - taxing the value of living in the family home the same as you would a bank deposit. Iceland, Luxembourg, the Netherlands, Slovenia and Switzerland all do this. This eliminates the tax differential between the family home and other investments, so people have an incentive to invest in businesses.

The majority of European countries adopt another approach. They drop the ‘broad-base, low-rate’ idea completely. They hike up income taxes and use that money to reduce the taxes on other types of investments. The left of politics makes a big deal of the higher marginal tax rates in Scandinavian countries for example, which seem to have little negative impact on their economic growth. But they ignore the fact that the tax rates on capital - businesses, retirement savings for example - are much much lower than they are in New Zealand.

This approach again helps to reduce the differential between investment in housing and other types of assets, so people still have a strong incentive to invest in businesses. Of course property addicts like to point out that average people don’t have that many opportunities to invest in businesses. In these countries that role is played by retirement savings, which manage people’s portfolios on their behalf. Investments in retirement savings in particular are often untaxed when the income is initially earned.

The Impacts of this Experiment

As a result of this tax history, Kiwis have piled into housing. More of our assets are tied up in housing than any other developed country in the world, and house prices are a testament to that. 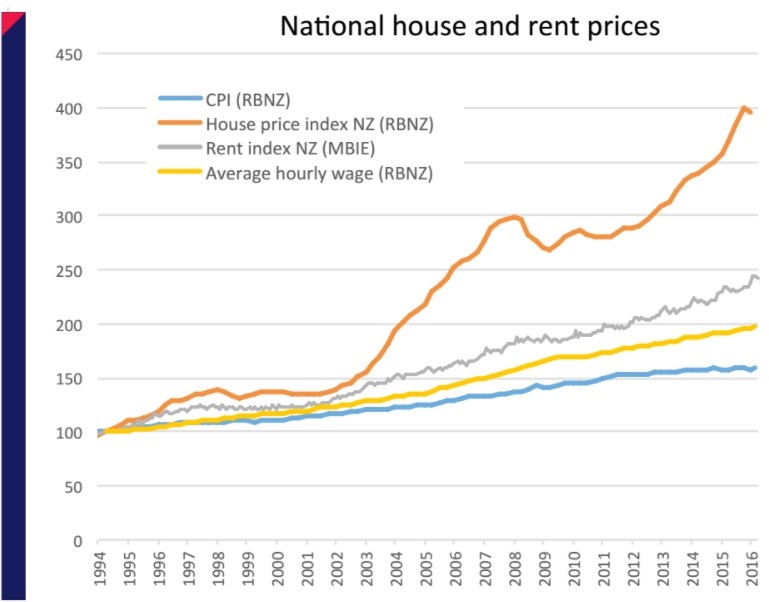 House prices have risen faster than any developed country, leaving us with the least affordable housing of any developed country. Rents have followed suit, rising faster than prices or incomes as landlords struggle to maintain some level of return on their investment. As a result, ordinary people have to work more hours to pay for their rent than they did in the 1990s.

Housing is the key driver of growing inequality. Since the mid 1990s inequality has not really grown at all. Workers in general have been getting their fair share of rather mediocre productivity gains. However, when you take housing into account it is a different story. After housing costs inequality is rising. 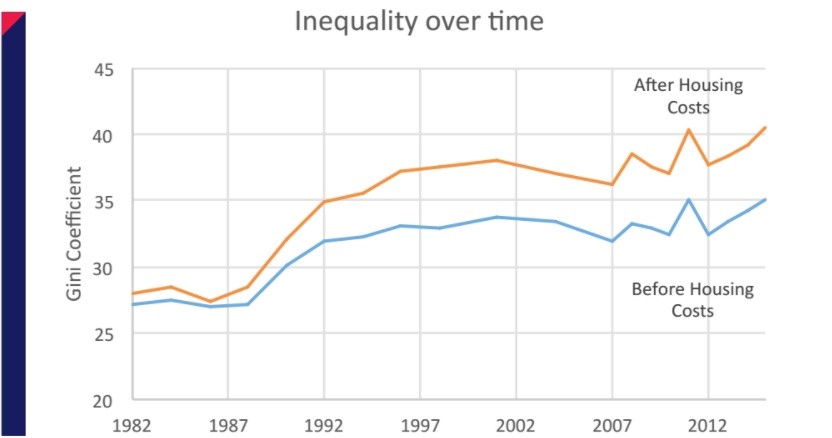 Rents rising faster than incomes are the key driver of poverty at the bottom end. And higher house prices are the main driver of rising wealth at the top end. Once housing costs are taken into account, the bottom 10% of families are still no better off in real terms than they were in the 1980s. 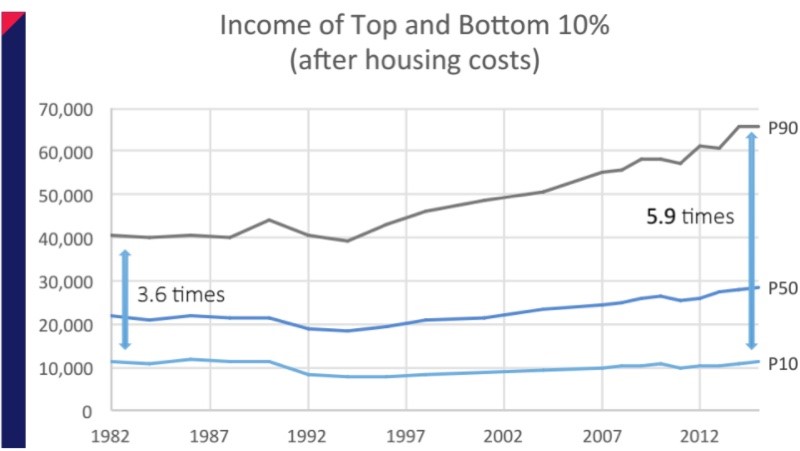 It isn’t like this is helping our economy. Most of our investment is going into unproductive areas - bidding up the price of already existing housing. Countries don’t get rich together that way, some (namely asset owners) get rich at the expense of others. In New Zealand we have effectively seen a massive transfer of wealth from younger generations to older ones. Our businesses suffer due to lack of investment, which is why our incomes are so low. Meanwhile we all bear the risk of record high foreign debt. 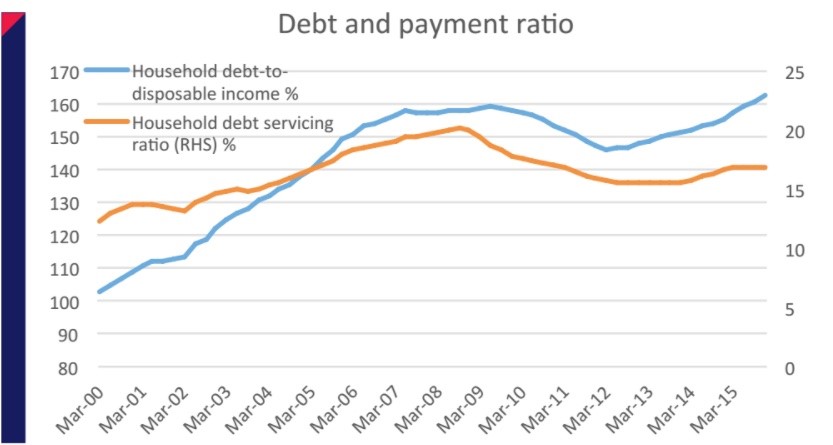 Could Other Factors Be Driving House Prices?

Much has been made of the role of cheap credit and housing supply in the rise of our house prices. It is impossible to completely disentangle tax from these other factors. However over the long run these other factors cannot explain everything.

Firstly cheap credit. This has been available around the world for many years, yet New Zealand has topped house price rises since the Global Financial Crisis. And when incomes are taken into account, we really do stand out. 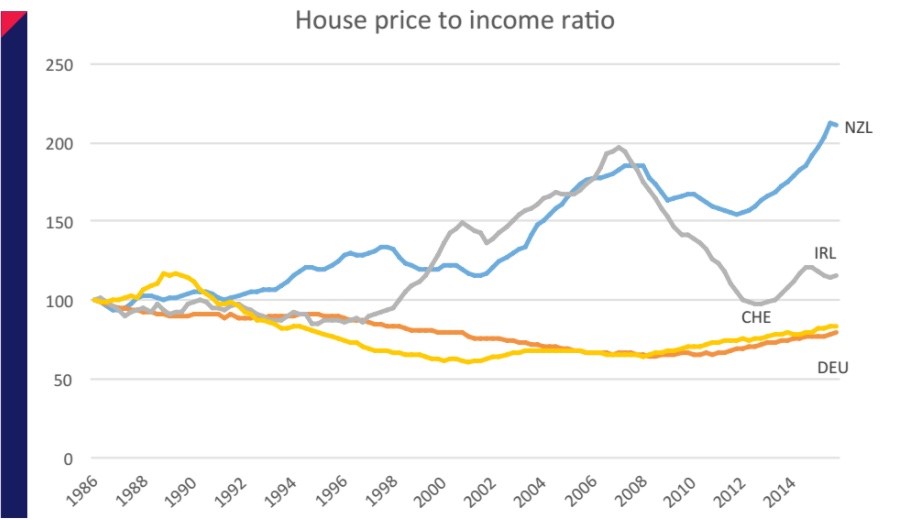 We topped the latest Demographia survey in terms of unaffordable housing in the developed world. Interesting to note that the two markets just behind us - Australia and the United Kingdom, both have a Capital Gains Tax excluding the family home yet are still well above what experts call “affordable”. 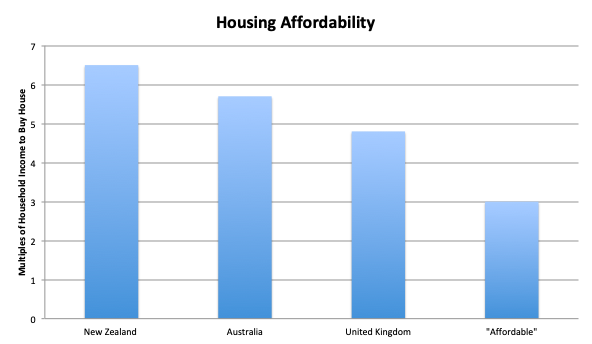 Housing supply is certainly an issue, particularly in Auckland. However many other markets in New Zealand have been unaffordable for some time, without a discernible supply issue. Auckland too was already unaffordable long before the shortage appeared. And again internationally we are not particularly unusual for our planning rules, yet we are a stand out on house prices.

The cost of construction is often raised also. However this is not the key driver of higher house prices - the price of land is. Land banking is the key problem, and this is driven by the differential tax treatment of property. Why develop land when you can make more money sitting on an empty section? 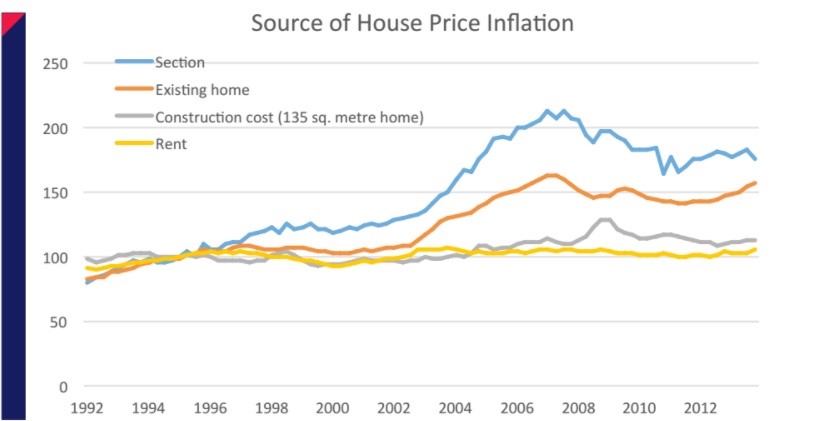 So What Do We Do About It?

If we care about inequality, house prices and the economy, we need to tax property the same as other assets. That extra income could be used to reduce income tax by up to one third. This would be a true broad base low rate system. Returning to the original graph, that would equalise all lines on the chart by lifting the lines on owner occupied housing and rental properties and dropping the others.

Of course, even if you understand that our tax system favours housing, especially the family home, you might think that is a good thing. Bear in mind however that half of Kiwis don’t live in a house they own. Around 40% of Kiwis own nothing at all to speak of. Aren’t they the people that deserve access to New Zealand’s biggest tax break? Instead, through their income taxes they end up paying a greater burden than many of us. This property loophole is particularly exploited by the rich. One third of the wealthiest people in New Zealand don’t even pay the top rate of income tax. That isn’t the idea of a progressive tax system, and it doesn’t fix the huge distortion that exists.

Nonetheless, if we don’t care about inequality and we want to keep our tax breaks on housing, then we need to at least abandon the broad-base low-rate mantra. We need to drop the tax on other investments to match that on owner occupied housing. This will solve our investment problem and obsession with housing. The downside is that it gives a huge tax break to people with assets - the rich. The question there is where the money comes from to pay for the tax break. Scandinavia achieves that by getting more income tax from higher incomes.

A Capital Gains Tax which excludes the family home achieves neither of these things. It hikes up taxes on rental property, but leaves owner occupied housing untouched. To make matters worse it hikes up taxes on businesses too - taking them over 50% of returns. As mentioned, higher capital values for a business are a sign of higher expected future revenues. Since revenues already get taxed eventually, a Capital Gains Tax effectively brings forward future taxation burden on business. Given the already high rates of business taxes, why would anyone bother to invest in a business then?