National have reopened the NZ Super debate by sticking by their 2017 policy of raising the age of eligibility to 67 in 2037. Despite this being the wrong solution (means testing is fairer), too little and too late, at least they are acknowledging the problem we face. Meanwhile Prime Minister Ardern is keeping her head firmly in the sand. Her idea that pre funding NZ Super can fill the gap is as realistic as building a bridge between the North Island and South Island. Let's look at the facts.

Since Muldoon’s blatant vote grab in 1975, the cost of NZ Super has been rising and rising. Likewise our current health system is unsustainable, with costs growing far faster than our tax revenue. All experts agree both are unsustainable, although our current crop of politicians seem to swear it ain’t so.

Adding to both of these problems is that fact that in 2010 the baby boomers - the large generation born in the frenzy post World War Two - started retiring. The issue is that both NZ Super and health costs are largely driven by the elderly (technically ageing isn’t a problem for the health system, but dying is… so close enough). This means both sets of costs are accelerating.

Max Rashbrooke found this interesting fact when he was researching the size of government. Everyone seems to think that government did a lot more in the good old days of the 60s and 70s before it was all slashed by Roger Douglas and Ruth Richardson. Sadly, that ain’t so; government is about the same size now as it was back then.

So what is the difference between now and the good old days? Basically our welfare state has been taken over by the elderly. We used to invest in kids, now we spend a lot more money on the elderly through health and superannuation.

The multi-billion dollar question is when will the younger generations finally rise up and throw off the yoke of the baby boomers? It has to happen eventually, it is only a question of when. Of course predicting the future is impossible, but that shouldn’t stop us trying. So here are a few milestones for the future which might just trigger this uprising.

By 2030 one in five dollars that our government spends will be spent on New Zealand Superannuation. There is no way around this, despite what Winston Peters claims. If the economy grows, so does our NZ Super bill. The elderly are living longer, so the bill will keep climbing.

For the past few years our NZ Super bill has been growing by half a billion bucks every year. That is a big chunk of change and could lift a lot of kids out of poverty. Instead we are paying that to our retired people each and every year, regardless of whether they are still working or how many millions they have.

We don’t notice it because we cut little corners here and there, but after a while those cuts add up. Eventually it starts to look like our society will fall apart at the seams because of the lack on investment. The question is when?

2045 - When Health and Superannuation Take Over the Welfare State

On current projections, health and NZ Super will become half of government revenue by 2045.  If it hasn’t already happened, this will be the year that our welfare state collapses under the weight of the elderly. Why? Generation Xers like me will be starting to retire, and most of the baby boomers will still be kicking around thanks to a much longer life expectancy. Together, through New Zealand Superannuation and the health system our elderly generations will make up over half of all government spending.

The young will be finally squeezed out. If there isn’t finally a revolt at the ballot box, you can expect people to vote with their feet - heading to the younger countries probably in Asia with lower tax rates.

Of course this isn’t realistic, we will have to keep spending money on things like education. That is why the prediction for 2045 is that we will have a budget deficit of over 8% and debt will be starting to spiral out of control.

By this stage you are probably yelling “It’s Okay! We have the Cullen Fund!”. Well it is worth bearing in mind that the current pot would fund less than 3 years of our annual NZ Super Bill. By 2045 it will be long gone. The Super Fund is pretty much bailing out the Titanic with a spoon.

The answer is simple: we need to reform both NZ Super and our health system. The sooner we do that the sooner we return to what countries should do: investing in the future. 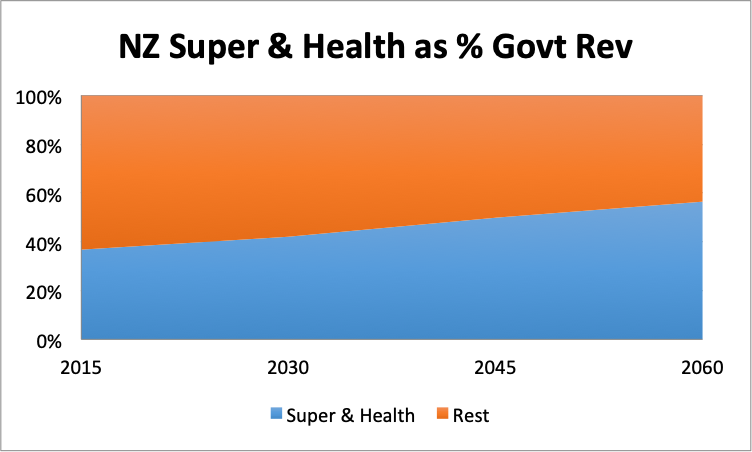