Here’s the definition of an “Uncle Tom” – one who works against the interests of his own people, sometimes pretending that he is not. Used particularly in the context of a people who are enslaved or do not enjoy the full rights they should. 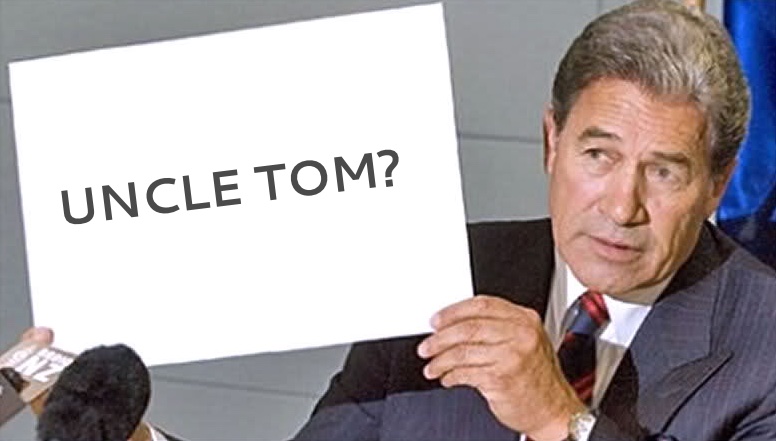 In the New Zealand context, it is the Treaty of Waitangi that defines the rights of Maori and of subsequent settlers. In particular the right of Maori to rangatiratanga (self determination) as per Article 2 (of the te reo Ti Tiriti O Waitangi which after all was the treaty almost all chiefs signed and as per the UN Declaration of the Rights of Indigenous Peoples, takes precedence anyway).

The issue is why Maori are over-represented in statistics of economic and social underperformance. The general agreement is because of decades of denial of rights, breaches of the treaty and a centralized delivery system of education, health and social security that is not empathetic to Maori values. The denial of  rangatiratanga even today means that these disadvantages are unlikely to be overcome.

My question of Maori gathered at Ratana was why they tolerated Winston Peters and his New Zealand First Party which, from what a can see acts against Maori interests, supports the Don Brash Hard Right, Hobson’s Pledge vision of full assimilation and loss of all that is indigenous, and cares not one jot about Maori property rights as per Article 2?

The evidence for my claim that Mr Peters is little better than the Uncle Tom of historical folklore follows. Of course you will reach your own decision, mine is evidence-based – read on.

It is a well-known fact that NZ First won all of the Maori Seats in the 1996 General Election (a feat previously only accomplished by Labour); which makes it all the more curious that New Zealand First has harboured such antipathy toward them ever since.

Explanations for the reasoning behind NZ First's refusal to stand candidates in the Maori Seats from 1999 onward have ranged from a distrust on the part of Mr Peters towards MPs elected from those seats (in specia, that they might prove to be more loyal to their 'people' than to their Party), through to a desire to attempt to demonstrate the Maori Seats to be unnecessary by refusing to stand in them. This has previously been accompanied by Mr Peters’ explicit support for their abolition; as well as a certain degree of annoyance when National, in the early-2000s decided to "pinch" NZ First's enthusiasm for the removal of the Maori Seats.

Ever since the nationwide movement towards the re-organization (and amalgamation) of local government began in earnest in 2009 under then-Local Government Minister Rodney Hide, there have been parallel efforts to attempt to secure Maori Wards (in the broad model of the Maori Seats), and/or reserved seats for area Maori groups on local authorities. Winston has led the charge in opposition to these, viewing the former as an affront to his unitary nationalism (using the label "separatism" and on occasion the more inflammatory “apartheid”) to charge they are just undemocratic, despite there being no evidence that the Maori seats in parliament undermine democracy. In fact quite the reverse, both Labour and National acknowledge that affirmative action as still essential to maintaining the democratic rights of Maoridom to exist as per the Treaty. Indeed my own view is the same – if only we honoured the Treaty these wards would not be necessary. But we don’t, so they are.

Despite the common belief that the 2004 legislation was a Labour Party effort, Winston Peters has previously been proud to claim rather more than partial credit for some of its provisions. In specia, New Zealand First demanded that the ownership for the foreshore and seabed be vested in the Crown - rather than the "public option" which Labour had initially proposed, and which would have entailed no specific title. The import of this in a Treaty context ought be obvious – the handing over of title to one Treaty Partner ignited what's been called "the largest single theft of Maori land", providing serious concern for many Maori.

Despite the Takutai Moana Act put forward by National seeming to settle the issue in 2011, New Zealand First continued to campaign vigorously for the repeal of the 2011 legislation as part of its efforts to return to Parliament that year - insisting that were NZ First in a position to do so after that Election, that it would reinstitute Crown Ownership – something that is unconscionable to anyone familiar with the Treaty’s article 2 that holds all natural resources not willingly sold remain the property of Maori.

There is thus, arguably, a very real risk that a strong NZ First come 2017 will actually be able to arm-twist its prospective Coalition partners - whether Labour or National - into revisiting this issue and once again transferring the foreshore and seabed into Crown hands.

4. The Principles of the Treaty of Waitangi Deletion Bill

This draconian backward step was predictably, responded to rather unenthusiastically by most of the political spectrum - and even resulted in the Party being criticized by the United Nations. Some members of the House recommended that Winston Peters obtain at least a rudimentary education of what the Treaty is about, and at least make the effort to understand the Principles.

The import of such a move - and its potential ramifications for Maoridom ought be plainly obvious. New Zealand legislation being read in the absence of the Treaty and its principles would considerably weaken the position of Maori - and undermine the reciprocal and consultative relationship which is supposed to exist between the Crown and Maori as Treaty signatories. Such a move would also, interestingly, seriously weaken the capacity and abilities of the Waitangi Tribunal.

Don Brash has stated publicly that his organization are considering donating money to New Zealand First, on grounds that the latter is "the only political party" which seems to be in accordance with the Hobson's Pledge organization's strong "one law for all" ideology. The fact that Don Brash's radical agenda apparently has no better electoral vehicle in our politics than New Zealand First ought be of some concern to Maoridom - not least because NZF are far more numerous and effective advocates for same than the ACT Party of yesteryear. NZ First has a far better record than other parties of actually attempting to turn rhetoric into policy on this subject.

New Zealand First is poised to make political inroads later this year on a scale unseen since the Party's 1996 heyday. Part of this insurgent appeal may very well be an effort to lure in disgruntled non-Maori voters with talking-points and rallying-cries along the lines of its previous campaigns' calls to oppose "separatism" and support "one law for all".

This has already been signalled by Winston as a "bottom line" policy-area for any post-2017 coalition negotiation. He sees honouring the Treaty by the two societies that signed it as creating "a parallel state where you've got a state within a state because of separatist racist laws". For parties of the Hard Right such denial of the treaty would accord with their ideology. Thankfully our governments over the 40 years since 1975 at least, have acknowledged the treaty as our foundation document.

But what makes NZ First exceptional, is that it has always enjoyed - and looks set to continue to benefit from – too much support from Maoridom. Part of the explanation for this, of course, is that Winston (and a not insignificant number of NZF's MPs both present and past) is Maori.  As a kaumatua, Winston is also afforded a duty of respect. Prior to the early 2000’s when he blatantly became a turncoat, he was acclaimed within the Maori World for championing solutions to the Maori predicament. Some of that residual acclaim lingers.

But they say power corrupts and with Winston things changed dramatically. This has facilitated a seemingly contradictory situation wherein NZ First can peddle a message explicitly tailored to anti-Maoridom voters ... while still somehow continuing to garnish Maori support. For sure, some voters are slow to recognise the change, but part of the reasoning for his lingering support amongst Maori is possibly because virtually none of the political actors have endeavoured to seriously put the spotlight upon this seeming inconsistency.

The reasons for that can only be posited. So I will - either these politicians agree with NZ First’s policy-set [as ACT and the Conservative Party do for instance], or they have potential need for NZ First in a future coalition ... and so have no wish to directly antagonize Winston in such a way. Sadly, political cowardice from Establishment parties is all to common and likely the stronger reason for silence.

My charge that Mr Peters is an Uncle Tom, acting against his own people in this case for political gain, remains. The Treaty is accepted in New Zealand as our founding document and its principles are in over 300 statutes. His relentless undermining of the Treaty is a betrayal not just of his own people, but to the whole of New Zealand. He might be Dr Brash’s favourite but to any reasonable New Zealander his party should be repugnant, just on these grounds alone.

That his political modus operandi is to hunt with the hounds while run with the hares, is the subject for another day – as is the event that turned him against the Maori interest.

In October 2007, Peters accused both National and Labour of “marching us into apartheid” and Maori of being “the most militant racists in the country”

“Don’t ask me, the taxpayer, to pay for their idea of our culture”

Peters on the Treaty

“The country does not need the Treaty”

"We reject the separatism so beloved of those Maori radicals who seek to use their own people for selfish gain” (as reported in The Dominion, 20 September 1996, page 1)