He’s President now and the core question is will he be moderated or is it a case of what you’ve heard is what you’re going to get? A second order question – although first order for us in New Zealand – are any of Trump’s economic ideas relevant as a template for managing the NZ economy in the years ahead? 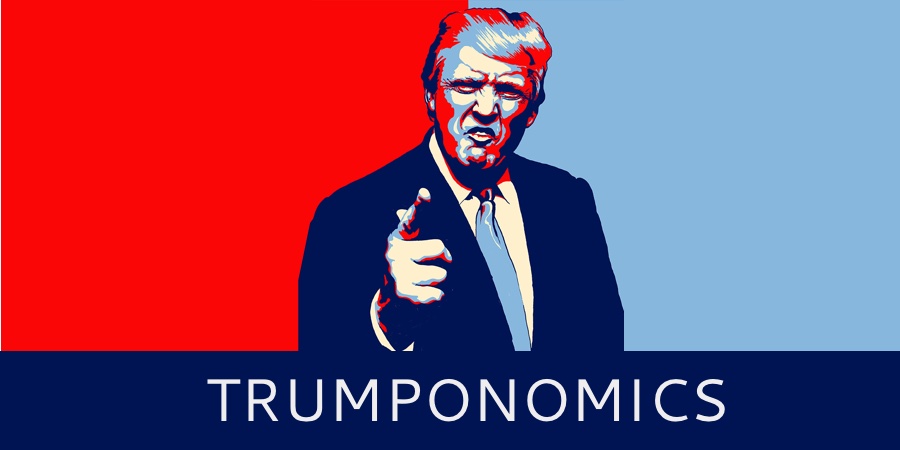 Let’s first recap the guts of the Trump promises

There are questions about how much of this will he actually do, and how fast. Assuming he does follow through, the question becomes how will he fund his fiscal expansionism, particularly if the foreign bond buyers of China and Europe are less willing to keep funding the US deficit? And will a lower trade world be a less prosperous world with the inevitable negative effects on commodity prices being one manifestation of that?

The answer of course is we don’t know – and won’t until he starts showing us his new reality. If a fiscally-stimulated America has to fund it itself internally, it will either run into inflation pretty quickly (if it prints money) or crowd out private spending through higher interest rates (if it tries to sell bonds to households).

Shrinking world trade and rising US interest rates look like being inevitable if Mr Trump is good on his word. It’s not feasible that an infrastructure-led spend up in the US on his terms would be strong enough to stimulate much beyond his shores.

Can Europe step in and provide an engine room for world growth? Doubtful given its defences will be competing for funding. It could of course abandon that as a priority but given the internal stagnation within its own Southern States as well as Brexit seeing its second largest economy heading out on its own, it’s difficult to see Europe looking far beyond Europe.

How about China? Well it depends on selling stuff to the US no matter what it may say. And it has spent those proceeds largely on expanding the capacity of its economy enormously. In economic terms, it could end up all dressed up but with nowhere to go because its main customer stood them up.

Against this backdrop it is difficult to see New Zealand riding another commodity boom in the foreseeable future. We have to rely on our own devices to keep our economy growing and per capita incomes rising. And while we have plenty of options, the political will might be hard to extract. For example we have the Trump option – to switch to fiscal stimulus and away from the stimulus provided by high immigration, and free money has a number of hurdles.

Let’s just hope that Trump’s bark is way much more than his bite turns out to be. Thanks to the “steady as she goes” dead weight inertia from our own political establishment our resilience to a truly Trump world is – well – not so great.