Firstly, polls can get it wrong, particularly when turnout is low, or people are ashamed to admit who they are voting for. 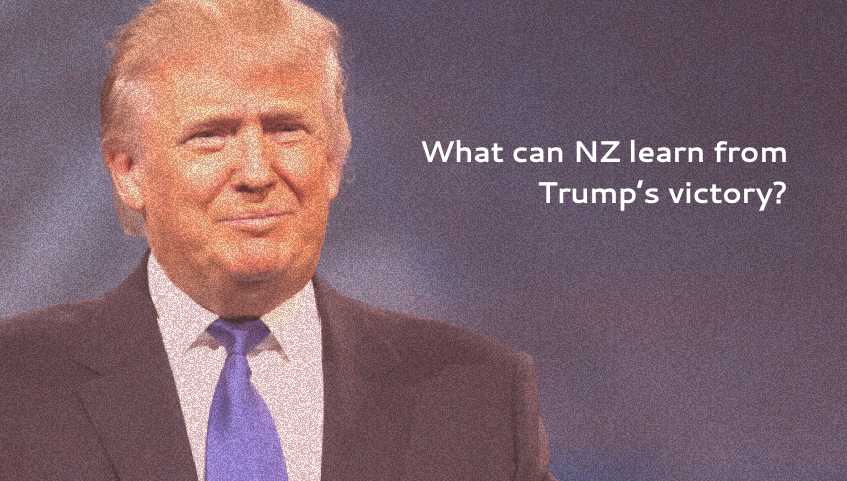 In the 80’s America had their own version of Rogernomics; Reaganomics. Much like here a lot of the reform was sorely needed, but it left some socia l wounds that have since festered. Now we are seeing the outcome of that.

The idea of Reaganomics (like Rogernomics and Ruthenasia) was that if you freed up the economy, people would create more wealth, and that extra wealth would eventually benefit everyone (trickle down). The trouble is that trickle down hasn’t worked. In this country most of that wealth has gone into housing speculation, pushing up the cost of living for everyone.

Trickle down hasn’t worked in the United States either, and for way too long the Establishment Parties in America haven’t done anything about it. I’ve spent quite a bit of time in Backblocks America - including on motorcycle trips - and what has always astounded me is the disconnect between those Backblocks and the seaboard states where the bankers and the tech gurus dwell. It’s like two different worlds.

It is the same here in New Zealand where the Wellington, Christchurch and Auckland elite are quite separated from the provinces; or even from the working class suburbs of their own cities. No matter how ‘cool’ we think Mr Obama is – he has simply pissed too many people off, and at the end of the day there is only one America.

The same backlash could hit here, given our own big, lumbering Establishment parties that really have not served the provinces that well. You cannot have an economy “doing well” when the salaries of the bankers, senior civil servants and the upper tranches of the corporate world are capturing the benefits of that and multiplying it through property speculation. Trickle down is a farce: the ballot box eventually tells the truth.

The difference is that New Zealand has more time; thankfully we are not in the position that the United States is in yet. We need to take action to prevent the same thing happening here, but that means ending the cosy two party system we have. We need to make these Establishment Party-led governments respond to the needs of New Zealanders way sooner than it has taken the US - or the UK - to respond. We do not want an extremist being the eventual response to electorate frustration with ‘the steady as she goes’ policy negligence of John Key-style governments. How many more elections before that’s inevitable? Form your own view.

Trump is an extremist; not a radical, an extremist. We have to hope, hope and hope again that his rhetoric is not translated into action lest that leads to a very ugly clash with America as the footsoldiers of extremism take the law into their own hands under the belief they too now have a mandate to act outside the law. We have to hope that his infatuation with Putin isn’t a love affair but rather only adulation of him for being ‘tough’. A ‘tough’ antidote to Putin would not necessarily be bad. There is so much we have to hope for with President Trump that one has to have doubts that all those hopes will be realised.

Finally, what does this mean for New Zealand? It seems firstly that the TPPA is dead in the water. Ironic isn’t it that New Zealanders were concerned we weren’t getting enough out of it, we were afraid of United States corporates having too much power, and in the end it is the United States that buries it.

If Mr Trump is true to his word – which only time will tell – then we can safely forget about the United States for a few years while their focus turns inward. New Zealand’s future for trade and diplomacy moves squarely toward Asia. It will be interesting to see what that means for the United States’ position in the world.

The more concerning thing is what this means to the world’s greatest challenge – climate change. After just being ratified, the Paris Agreement is already looking very shaky.