“The best argument against democracy is a five-minute conversation with the average voter.”

So said Winston Churchill and little has changed. We just commissioned market research to determine what makes New Zealand voters tick and the answers are depressing.

One of the line of questions asked of a poll of 1,000 voters was designed to  determine the factors that contribute to their views on policy. It went like this;

By studying the collective choices made, 10,000 of them, we can determine the decision architecture of the voter – and also compare the attractiveness of the competing policies, parties, etc. This is how it turned out: 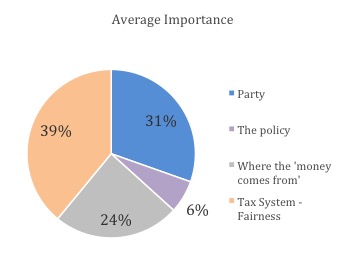 This is where it gets depressing. When the average voter is confronted by a question on policy their primary question is, “is this policy fair on me?”.  That contributes 39% to their decision. Now of course, this is not a question on whether it’s fair on the people of New Zealand but rather – is it fair on me. Do I consider that it’s fair that I should have to pay rather than benefit from this policy? And you can imagine it really means, do I benefit or not. How depressing is that, that when it comes down to it, self-interest predominates – and we wonder why our politicians focus mainly on delivering us candy, and never tell us which taxpayers specifically will be paying for it. Are we really such children?

Next – contributing 31% to our decision – we ask ourselves who is promoting this policy. The importance of this factor reflects the well-known tribalism of NZ politics that sees only 30% of voters ever changing the party they vote for. In other words I support my party whether it’s right or wrong – through thick and thin. Again how childish is that – where a coherent and beneficial policy is rejected because it’s been promoted by a politician of the wrong hue. We recently saw this with Andrew Little rejecting Bill English’s raising of the age of eligibility for NZ Super to 67, even though Labour had previously promoted precisely that policy. This is not unusual in NZ politics – politicians from the”wrong” party cannot possibly have sensible ideas apparently to many voters. Again, pathetic.

The issue of third most concern to the average voter confronted with a new policy is who is going to pay for it.  What we like most of all is seeing those people or those practices we don’t like for whatever reason being hit up to pay the cost. So we love sin taxes, pollution taxes, taxes on rapacious landlords, capitalists, anyone we are jealous of – being the target to fund a policy. So long as it’s not us of course - that type of issue contributes 24% to our decision process.

Which leaves just 6% of the decision-making from the average voter on a policy, left for whether the policy benefits the well-being of New Zealanders as a whole. That consideration is last and certainly least of how we determine our support for a policy being mooted.

When you look at this is there really any chance of New Zealand ever breaking out of the same old, same old Establishment party duopoly with their emphasis on disturbing as little as possible, rather than doing what is good for New Zealanders, current and future. You’d have to doubt it given that voters don’t want anything that doesn’t benefit them directly, want their preferred party to stay in power forever and want someone else to pay for everything.

That is realpolitik in New Zealand, the land of  entrenched social and economic conservatism. We pity those at the wrong end of the gaping inequality divide, but there is no chance we will be proactive in helping them.