Labour has re-committed to free tertiary education – including 3 years of free post-school education over a person’s lifetime. As an added sweetener they have boosted student allowances and loans by $50 per week in a package that will cost $2b over 4 years. Their initial announcement last year sparked a bidding war over tertiary education; United Future has matched Labour’s initial policy, the Greens are promising to “move towards” zero fees and universal allowances and New Zealand First top the lot with a $4.6b offer to provide universal allowances and to write off all loans.

The question is whether this is the right way to spend that kind of cash? The fact is that this is more middle-class welfare than a hand up to those that really need it. TOP’s Unconditional Basic Income for 18-23 year olds is far more progressive and will give all young people the support they need to reach their potential.

About 2/3 of people go on to some further study after school; roughly evenly split between degrees and other types of education. In the richest 20% of households more than half of the young people go on to degree level study. 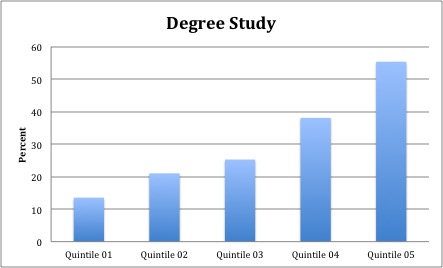 The harsh truth here is that providing more funding for tertiary education helps those who are already well off, and are likely to be well off for the rest of their lives. The government already funds 80% of the costs of tertiary education.

What do they invest in helping the poor get a better start in their life? Very little.

If you assume that cost is the major barrier then surely free tertiary education will help poor people go to University?. Given that we have a fairly generous system for loans, it may not be. Meanwhile, our compulsory education system does a bad job reducing the differences between rich and poor kids. Some poor kids turn up to school 2 years behind their richer counterparts, and they never catch up. Overseas evidence suggests that a greater investment in pre-school education (as set out in TOP’s Education Policy) would actually be the best way to help more poor people get to University in the long term.

In the mean time, if you really want to help poor people go to University, the best thing to do would be to fund the First in Family proposal put forward by NZUSA. At a cost of $54m it would help anyone who is the first in their family go to University. This would kickstart the cultural change that is needed amongst poor families.

Remember the reason that the cost of other parties’ policies are so high is because they would also be giving free tertiary education to everyone who already goes. Given that most people who go to University are from relatively well-off households (and they receive large personal benefits from that education), these policies look like middle-class welfare.

Is this the ‘Future of Work’?

Labour has made a big deal of the Future of Work. Huge changes are afoot in the economy, industries are being disrupted left right and centre. People will need to continually retrain over their lifetime to stay up with the play. But how do these new policies from Establishment parties sit with the future of work?

This also raises the much larger question of whether our tertiary education sector is fit for purpose in the 21st century. Is four or five years of study really necessary or can degrees be trimmed a bit? Is it time to integrate the tertiary sector better with the working world?

In the past few years new models of post compulsory education have emerged. Dev Academy in Wellington is teaching people to code in 18 weeks, and has as good (or better) employment outcomes than courses that can last 3 years. Live the Dream is helping people further their own projects that can make a difference and earn money at the same time. Toi Whakaari are experimenting with ways to integrate Maori tikanga into the way we learn and run our organisations. A lot is happening, our tertiary system needs to stay up with the play.

Instead of throwing more money at the issue, TOP wants to review our tertiary sector to make sure it is fit for purpose in the 21st century. In the meantime we want to put the power in the hands of young people. TOP wants an Unconditional Basic Income (UBI) for all 18-23 year olds. That will enable young people to set their own goals and work out the best way to pursue them.