Experts tend to disagree on whether our housing crisis is caused by demand or supply. There are often political reasons for this disagreement, depending on what sort of solutions you want to see implemented. However, nobody can deny that the tax system is distorting our housing market.

How that plays out depends on your assumptions and the way you see the world. In short, either the tax system is causing high house prices or it is threatening vege growers on the Bombay Hills. Maybe even both.

The Core of the Problem

It all starts with our tax system and the Tax Working Group set this out very clearly. As you can see from the graph below, property is taxed vastly differently from other assets. However, the biggest tax break is not for investment properties, as most people would like to believe, but the family home itself. Labour excluding the family home from its Capital Gains Tax would not have fixed the core of the problem. 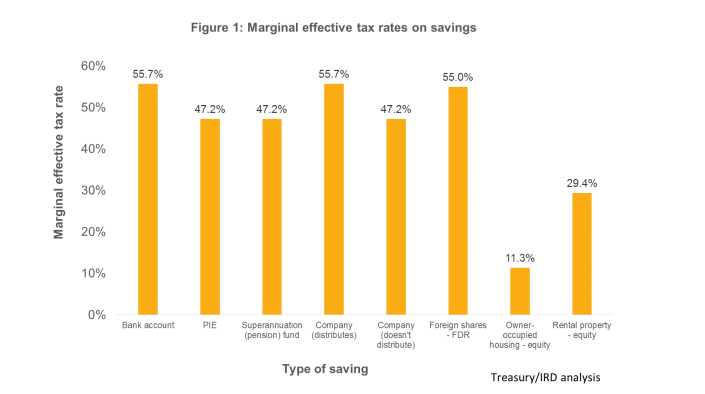 We have known about this tax break since the tax system was reformed in the 1980s. In fact, it was discussed in a 1989 “Consultative Document on the Taxation of Income from Capital”. Page 79 sets out the facts that no economist would disagree with. Essentially, when a person lives in a house, they get a non-monetary benefit from it (i.e. shelter and other nice stuff). Whereas if a person pays rent, they need to use money out of their after-tax income. An owner-occupier is effectively paying themselves rent, but because no money changes hands, they don’t have to pay the tax.

This means that the best place for anyone to put their money is into their own house. This sort of tax advantage for housing isn’t unusual, particularly in Anglo countries. However, Andrew Coleman describes New Zealand’s system as the “most distortionary tax policy towards housing in the OECD”. As a result, we have the highest rates of investment in housing compared to other assets in the world. And the rest of our economy suffers from lower rates of investment as a result.

No economist or expert would disagree with the analysis so far. What the tax system does and has done since the 1980s is encourage us to put more of our money into property than we normally would. In other words, it artificially increases Kiwis’ demand to invest in property. If you don’t believe me, the Treasury report from 1989 said as much. We’ve known about the problem for a long time, as long as it has existed.

So when experts talk about the housing crisis and the problem with the “demand side”, this is what they mean. Investors stoke the demand even higher, but that is only because they know we all want to own our own home. And yes, population growth also adds to the demand side problem.

In terms of the housing market, the tax system effectively increases the demand for housing and land much in the same way as a population increase.

However, not all experts see this tax distortion as a problem in itself. What some consider more important is how the market reacts in terms of house prices. And they think building of houses depends on the response of supply.

When demand increases and supply can’t respond, prices rise. This is usually what experts mean by a “supply side” problem. And given that we have had some of the biggest increases in house prices in the world in recent decades, New Zealand clearly exhibits symptoms of this problem.

Some experts suggest removing the red tape around housing to ensure that we get a perfect (or at least better) supply response.

What would a supply response look like? Remember that even if we get a perfect supply response, the tax system still drives increased demand. People will still overinvest in housing. This would lead us to buy bigger properties, build bigger homes, and pay significantly more for land when there is traffic congestion. And the fact is that we already see these responses in the New Zealand property market, as well as higher house prices.

Here are a few facts: according to Andrew Coleman “the average size of newly constructed houses has increased faster than in Australia or the United States and is amongst the largest in the world.” More than a third of 3 bedroom homes and half of 4 bedroom homes in Auckland have 2 or more spare bedrooms. Given the levels of homelessness we face, this is a stark reminder of the growing gap between the rich (property owners) and poor (renters and homeless).

We can’t merely blame the lack of a supply response for the problems we face. The demand side, including our tax system, is also contributing.

Be Careful What You Wish For

If we did manage to reform housing supply without resolving the demand side issue, it is very likely that house prices would fall. This should be no surprise – supply would increase and some rich people would lose their views as a result of their neighbour subdividing.

Most worrying of all are land wastage and urban sprawl. Vege growers on the Bombay Hills are already at risk of Auckland’s creeping concrete. Freeing up supply would no doubt finish them off.

And what about the associated costs of sprawl? More cars and everyone spending more time in traffic. Congestion charges are needed to counteract that risk. Cities like Houston in Texas are held up as champions of freer housing supply. Yes their houses are cheaper, but what many people save in rent or mortgage, they end up paying in transport. And finally, compact cities have a far smaller carbon footprint.

This much is clear: both housing demand and supply need to be fixed for New Zealand to have a sustainable economy, society and environment.