While most New Zealanders agree that making New Zealand fair again is a priority – there is, amongst those reluctant to invest to make that happen, a common theme. It is best described as the denial of a portion of the babyboomers and older (those aged over 53). There is a cohort of this group who fall victim to intemperate and righteous indignation at the suggestion that they have had a free ride and that has driven in the rise in inequality.

There are several strands to the case against ‘babyboomer and older’ indulgence but arguably the most visible is the rise in property prices from 3 times the average wage in the 1970’s to now 8 times. For the layperson to get their head around the reasons why is no easy task but that of course is no excuse for denial.

Now the concern is that correcting the decades-long property boom can either come via a shock – some economists have argued that a 40% drop in prices is needed if intergenerational and temporal inequity is to be addressed. Personally I think we can achieve the correction without such a shock, but I agree the gap must be closed. The tax rebellion we’ve launched as TOP’s flagship policy is such an orderly approach – it simply removes the loophole in the income tax regime that enables owners of exempt or low yielding assets to escape their tax obligations. The consequence of that three decades-long contrivance between governments and their babyboomer electors has been that wage earners have borne far too much of the income tax burden. My estimate is that income tax rates can be reduced by about a third if we remove the tax privilege afforded asset owners.

The approach I prefer will knock property price inflation on the head but not collapse prices and provide some time for incomes to rise and close the gap. The beneficiaries will be the generations younger than the babyboomers and anyone (old and young) who has found even their rent is chewing up so much of their income now, that their discretionary income is falling, and falling fast. To date, packages like Working for Families have been an attempt to recycle income to these folk – although of course that hasn’t solved the issue as the taxpayers that fund WFF are wage earners in the main, not owners of exempt and low-yielding assets. 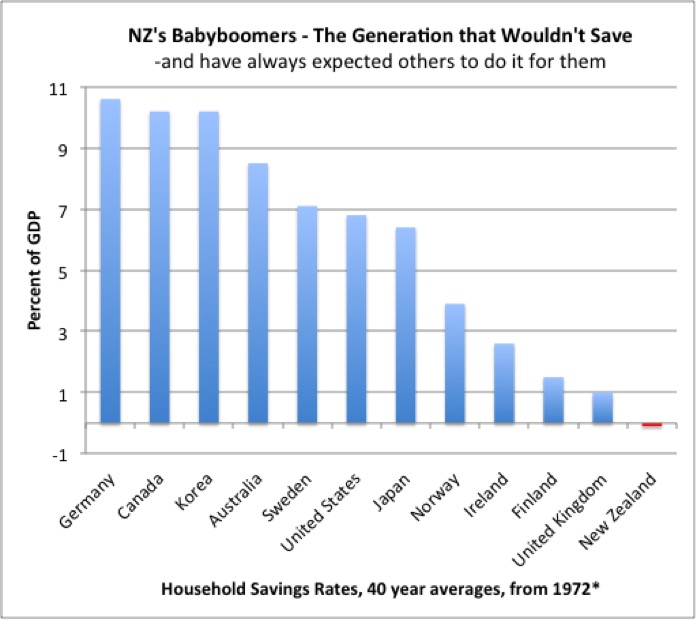 The reason we don’t save is obvious – we don’t need to. So long as the governments we have voted for, have sponsored interminable house price inflation by exempting home owners their fair share of tax, that asset has become the most desirable of all assets on offer. We have saved deposits (that have become smaller and smaller) and borrowed heavily (mainly borrowing foreigners’ savings via our banks) and leveraged like crazy into housing. The demand from for this get rich quick asset has been insatiable and of course the more we want to put into property, the further house prices rise beyond our income levels.

As we all know wage earners are just suckers. The real money is made from bidding against each other for houses. And the governments of these Establishment parties have loved it. The false prosperity all built on the back of inflated property values has expanded the property-owning elite to incorporate almost a whole generation, and until now the bulk of voters.

It is inter-generational theft, let there be no mistake. No saving necessary, shortages of capital for businesses that generate income and jobs, and a morbid dependency on foreign debt have been the outcome. The question is how to bring this helium balloon into land without a serious crash.

This is precisely what TOP’s flagship policy does. It simply shuts the loophole and phases that process in to minimise hurt. But from the squeals of indignation from some of the property owners you could be forgiven for thinking I’ve threatened to shoot their cats. The common misconceptions of those in denial include;

“It’s not my fault property prices have gone up”. Well sorry it is – you elected these Establishment party governments. As career politicians always say to me – “we just do what the people want”.

“I’ve worked bloody hard and saved for my house, not like all those layabouts still renting and spending all their money on cigarettes and booze”. Well hello – equating home ownership with “hard work” has to be the most hypocritical of all the objections. Try telling that to the families working 4 or 5 jobs just to pay the rent, or to the younger generation who will never buy now, and will also struggle with the rent. The reality is the bulk of today’s value of most people’s houses has come about through property price inflation – it has nothing to do with “hard work”. “Hard work” is what you get paid wages for or build businesses with.

“My home is my castle, it’s a sin to tax it”. Sure – so why do you pay rates?  The reality is taxes are collected as the price of a civil society, to underwrite fairness. Before World War One most taxes were property-based, overseas asset taxes are still significant – but here Roger Douglas wiped them out. That makes us an outlier – and the result is no savings, low investment, huge foreign debt, and an elite of asset owners stealing wealth from others..

“I don’t earn anything from my house”. This is a popular reaction too, and simply reflects the reality that some people don’t know the difference between income and cash. Many non-cash forms of income are taxed, the one I always like to quote is the deemed income New Zealanders have to declare on their foreign shares (whether they received any cash or not). It is set at 5% pa. At issue here though is the failure for some to recognise that when they own a house they still get a benefit from it year in and year out – that is the roof over their heads. This is the same benefit a tenant buys each year and is taxable in the landlord’s hands. Why should bulk (or multiyear) buying of that benefit exempt the owner from income tax that landlords pay? For owners renting to themselves of course that benefit should be taxable in their hands – otherwise it’s clearly unfair. It’s akin to saying that if I owned a bank deposit rather than a house I shouldn’t pay tax on the interest. It is the benefit that’s being taxed, not the asset. Still struggling? Look up “imputed rent”, learn the difference between income and cash.

“You’ll never get elected Morgan, advocating this”. That may well be so, but surprise, surprise I’m not chasing a job. I’m interested only about getting New Zealand fair again, delivering at last to those who haven’t pigged out on the politically manufactured inflation of property values. And when I look at the numbers I see that 54% of voters now are younger than the youngest babyboomer, so the tide is turning. Whether it’s this election or a future one, it will turn. You cannot keep ripping off the earnings of others via a tax privilege of this magnitude. They will revolt. I’d like to see that change orderly rather than extreme.

We over 53’s are in danger of becoming remembered as the “Stealing Generation”. I will allude further on the full extent of this theft in future articles. But we have an opportunity now to turn a lot of that around, to front up and acknowledge what has happened is wrong and that we do have the fortitude to correct it. If we don’t do it, it will done for us as our voter numbers dwindle.

So the only issue worth discussion here is the speed of transition, how to achieve it so that we don’t get too many property speculators who refuse to adjust ending up joining those tenants already in the queues for hardship allowances down at WINZ.

Not transitioning however, is not an option – it’s the putting right that counts. That is one opportunity TOP offers – to nudge whichever Establishment party is the next government to start taking steps. And this is just one of our policies to make New Zealand fair, make New Zealand decent again.

An Open Letter to John McDonald RE: "Dancing With The Stars"