We’ve been receiving a lot of policy ideas from our membership already; thanks for sending them through. We are developing a method for members to have an ongoing input into policy making, which we will announce in the New Year. 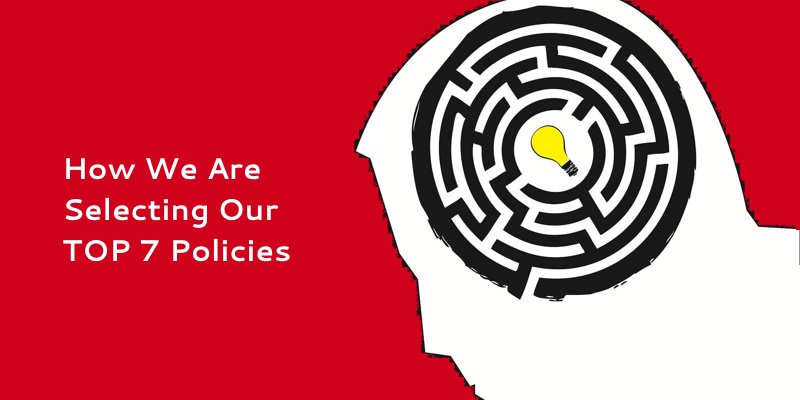 Our policy work is advancing rapidly, and we already have a good idea of our TOP 7 policy priorities. Before we announce those TOP 7, we wanted to let you know what we took into consideration as we came up with them.

Here is our beginners guide to policy making TOP style.

Many government policies are a solution looking for a problem. If the media or public get worked up about something, Establishment parties tend to have a kneejerk reaction and roll out what appears to be a coherent response. Too often unintended consequences then take over.

Before anyone goes marching into action, we need to stop and think really hard. Is there a problem here? How material is that problem? What is the real problem here? Are we dealing with the real long term problem or just a short term symptom?

Without clear answers to these questions, governments can often end up barking up the wrong tree. Their action may be popular in the short term, but if they aren’t dealing with the real problem then inevitably the problem returns.

Given the pace of modern life, such a considered approach is often missing. We saw this with the current Government’s attempt to make it up as they were going along on their ‘comprehensive housing plan’. Similarly dragging the chain on emissions reductions is now coming back to haunt them. But this Government is not alone on this front; we saw the same problems under the previous Labour Government with the foreshore and seabed debacle. This short term patch up job approach to government is what you get when you govern according to the polls.

Step 2: What can we do about the problem?

Of course there is evidence and there is evidence. Some evidence is high quality, and priority should always be given to that. Establishment governments here and overseas often don’t want to monitor and evaluate policy because they don’t want to know if it hasn’t worked. Sometimes an idea is new or novel, and hasn’t been tried elsewhere. As a result, sometimes there isn’t much evidence around on a particular topic. However, lack of high quality evidence shouldn’t always be a barrier to action. Overall, we have to make a judgement based on the best available evidence at the time, which is where values come into play.

Establishment parties often twist the question of evidence to their political advantage. Look at the issue of obesity, where the Government has announced a ‘22 point plan’ to deal with the problem. They say there is no evidence that junk food taxes work, yet there is more evidence for the use of junk food taxes and restrictions on advertising to children than there is for any of the policies in their ’22 point plan’.

Step 3: What is the downside?

Thanks to the inability of Establishment parties to make tough decisions, we think there are several policies that should be considered ‘low hanging fruit’ in New Zealand. These are the ones that will get priority to make up our TOP 7.

What constitutes a low hanging fruit? It should have high impact on solving the problem, with little or no downside. So what do we mean by downside?

Many policies have unintended consequences, and can compromise other goals. We’ve seen this in the past; perhaps the most well known example was when the government introduced a bounty for possums. Locals in Northland and Coromandel were upset not to have possums nearby so they set some free; actually increasing the spread of possums. Another example has been the Government’s plan to increase our agricultural exports, which in some regions has come at the price of deteriorating water quality.

On the other hand, the ideal policy is a win/win; i.e. it kills two or more birds (problems) with one stone (policy). It certainly shouldn’t compromise other goals.

The most obvious downside to any policy is the cost. Expensive new policy ideas need to be paid for somehow, and we need to acknowledge the impact of that. Most tax is collected via income tax, which already places a heavy burden on the average New Zealander. Income taxes also reduce the incentive for people to work, innovate and create wealth and jobs.

All our TOP 7 policies will either be fiscally neutral, or will have a plan for how to pay for them.

Remember if you think you can do better than our TOP 7, members will have the opportunity to contribute to policy in the New Year. It is our intention that the political rebellion that is The Opportunities Party will bring an altogether higher level of direct participation in our democracy than has hitherto be seen via the practices of the Establishment parties. Exciting.''

Image is work from Khalid Albaih adapted by TOP.