Our Real Deal Cannabis Reform was based around the idea of reducing overall harm to both individuals and society. One of the most startling facts to discover as part of this process was that alcohol causes far more harm than cannabis. Both alcohol and cannabis are prevalent in our society and enjoyed by a huge number of New Zealanders, however alcohol creates far more total harm[i]. Fortunately, with alcohol we have better evidence to draw from so that we may improve the current legislation that controls its use.

Alcohol is legalised and that framework has been relaxed over the last decade or two. Indeed alcohol regulation is far weaker than what we recommended for cannabis. The Opportunities Party (TOP) recommends increasing the legal age for alcohol purchase to 20 years, and increasing the price of alcohol by an average of 10% through excise tax. The $300m revenue from this will be used to provide a much needed injection of funds into community based youth mental health support and drug and alcohol treatment.

Alcohol is responsible for 4% of avoidable deaths and around $6b of total costs to society.[1]

The sources of harm from alcohol are very different to those from cannabis. For cannabis, most harm arises from the role of the criminal underworld and from processing users through the criminal justice system. For alcohol, the harm relates to violence, accidents and anti-social activity that arise from drunk behaviour in public places and in the home.

This infographic nicely summarises the impact of alcohol on society.[ii] 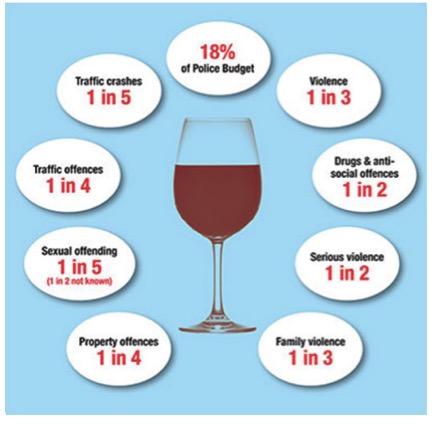 Injury costs make up ¼ of the total costs from all drug use, and alcohol makes up the vast majority (82%) of these injury costs. Some 600-800 people die each year from alcohol related causes (half of which are from injuries). Between 18-35% of injury related emergency department admissions are caused by alcohol, rising to 60-70% on weekends[iii]. Around one third of all police apprehensions and half of violent crimes are related to alcohol[iv]. Lower productivity on the job is also a major impact for all kinds of drugs.

What’s most telling is just how much greater such harm from alcohol use is compared other illicit drugs. According to a study done back in 2005 alcohol is 3 times as harmful to our society as other illicit drugs put together.[v] If we update the data into modern values, the harm from alcohol is estimated at over $6 billion per year. This can be compared with more recent estimates of harm from other illicit drugs, which puts harm at under $2 billion. Of that, cannabis harm makes up around $1.3b and amphetamines at around 0.4b. So alcohol generates around 4.5 times the harm of the next most frequently used drug, cannabis. 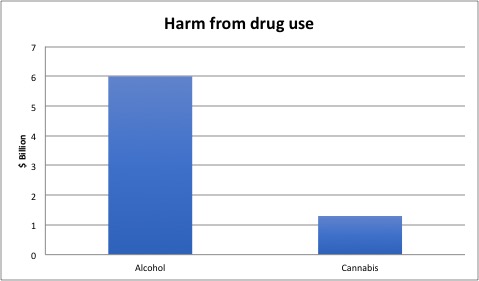 This level of harm is mainly due to the sheer numbers of harmful alcohol users (over half a million), which dwarf the dependent cannabis (26,000) and P (1,400) users.

According to international estimates[vi] around half of these costs are avoidable through stricter regulation of alcohol. In 2005 the Drug Foundation, followed in 2010 by the Law Commission both deemed the relaxation of alcohol laws of 1999 a failure and recommended tighter regulation. As per our cannabis policy, the optimal way to minimise harm is through a regulated market. The expert consensus is that alcohol regulation has become too light, contributing to this increased harm as per the diagram below (taken from TOP’s Real Deal Cannabis Reform). 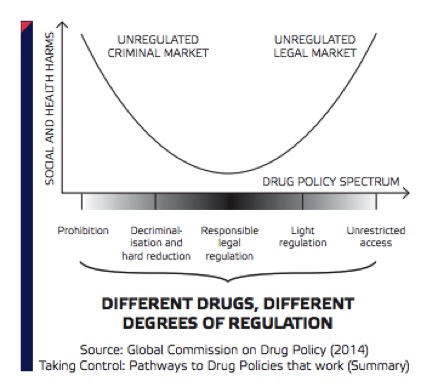 Those reports recommended that the harm from alcohol should be confronted by five main measures (known as the 5+ solution):

The current National Government has taken some action on the 3rd and 5th points. In 2012 they allowed Local Authorities to create Local Alcohol Policies (LAPs) that theoretically allow locals greater say over the placement and hours of alcohol outlets. However this approach has been found to be legally lacking; in 2016 Dunedin City Council got taken to court for trying to implement them. The Opportunities Party would work with Local Authorities to review the LAPs and make sure they contain minimum standards plus the ability for local people to truly have a say over how alcohol is sold in their area.

In 2014 the National Government also lowered the allowable blood alcohol level from 80mg of alcohol per 100ml of blood (0.08), to 50mg (0.05). There are some countries with a lower blood alcohol limit than this, such as Norway and Sweden (0.02). TOP’s position is that we need to evaluate the impact of the recent change before determining whether the level needs to be lowered further.

Of the rest of the recommendations, increased treatment is clearly a no brainer, as alcoholism is the key driver of substance abuse. As we saw in our Real Deal Cannabis Reform the returns on investment for drug treatment are very positive[vii], so there is a strong case for increased funding. Currently the government spends about $150m on treament, and there is enough demand to double that spend. The Opportunities Party commits to this funding increase as a matter of urgency.

That leaves raising alcohol taxes, increasing the drinking age, and curbing marketing and sponsorship. Of these three interventions, the first two have the strongest evidence behind them and were approved by our membership, so they are the focus of this policy[viii]. TOP will keep a watching brief on the evidence of the impact of alcohol marketing and sponsorship, but isn’t committing to action at this stage.

Evidence has shown that there is a significant correlation between the purchase age of alcohol and the range of harm that consumption causes.[ix] The current law is a minimum purchase age of 18 which was reduced from 20 in 1999. Following this change:

Conversely, raising the purchase age has been found to reduce harmful consumption and related harm, including drink driving, car crashes, injuries and deaths, and other health and social harm. Therefore, the reduction in harm benefits both older and younger cohorts. [xii]

-       Seven out of ten (71.6%) secondary school students report having ever drunk alcohol, with six out of ten currently drinking alcohol;

-       One in five (18%) young drinkers reported they planned to get drunk on the last occasion; and

-       Among all past year drinkers, a potentially hazardous drinking pattern was most common in people aged 18 to 24 years.[xiii][xiv]

It seems clear that, along with other policy and societal changes, reducing the minimum age for purchasing alcohol from 20 to 18 years in 1999 contributed to increased alcohol-related harm to young people in New Zealand.[xv] Accentuating the harm caused to youth by alcohol is the effect that it has on developing brains, similar to what we have discussed with cannabis. Therefore any significant changes to youth consumption are felt more acutely in the long term.

For the sake of consistency with our Real Deal Cannabis Reform, and given the overall goal of reducing harm, TOP advocates a legal purchase age for alcohol of 20.

The graph below shows that over the last thirty years the price of alcohol has gone through three distinct phases. From 1989 to 1998 the price kept up with both wages and prices. Then from 1998-2005 general prices rose less quickly, but both alcohol prices and wages rose at the same rate. Then from 2005 alcohol prices have risen more slowly than wages, and have almost fallen into line with general price rises. 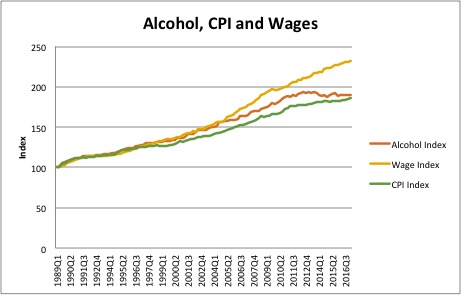 These phases are reflected in alcohol consumption as the graph below shows. When prices kept up with wages and prices, consumption fell. As alcohol became relatively cheaper, consumption again started to rise. More recently consumption appears to be falling again. This seems to be a cultural change, due to a shift towards consuming less, but more expensive, craft beer. 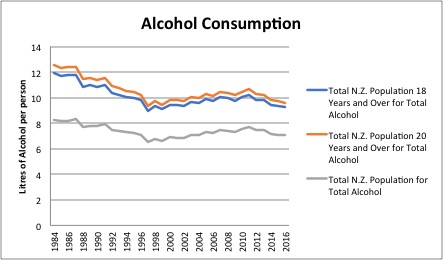 Like most goods, the consumption of alcohol is sensitive to price. The higher the price rises, the less alcohol will be consumed, and hence the less alcohol related harm that society will bear. Generally a 10% increase in the purchase price will reduce demand by about 5%. The elasticity can be lower for young people and problem drinkers, but they tend to drink cheaper products, which face a greater price increase from a rise in excise duty.

A 50% increase in the alcohol excise (as recommended in the Law Commission Report[xvi]) would result in a 10% price increase on average. Currently different alcohols are taxed at different rates (a policy that favours wine and to a lesser extent beer over spirits). It would make sense to smooth this out at the same time, so some prices will increase by more than others.

A 10% price increase would decrease demand for alcohol by around 5%[xvii]. It is an inexact science about how much that would reduce the overall harm caused by alcohol. However, as a reasonable guesstimate, a 5% reduction in alcohol harm would be worth around $300m to society.

Of course raising the tax also means more money for the government coffers. Assuming the tax collect on alcohol excise is roughly $712m[xviii] that would mean an increase in tax revenue of around $300m. This money could be used to augment the solutions put forward in the Real Deal Cannabis Reform, essentially promoting education and treatment for all drugs as well as after school activities for teenagers. As mentioned above, drug and alcohol treatment programmes are remarkably cost effective and in urgent need of doubling their budget.

Given the Real Deal Cannabis Reform will also invest at least $150m in these areas, there is likely to be a significant sum left over from alcohol taxation. We will look at how to spend that in the next section.

The problems of youth drinking, mental health and suicide are closely intertwined. TOP would invest the funds from an increase in alcohol excise in a boost for community based mental health services more broadly, particularly targeted at reducing youth suicide.

Our (soon to be released) health policy has a big focus on prevention, and mental health is a crucial part of that. Many people with multiple chronic conditions also have mental health problems. Clearly there is a problem with mental health funding in New Zealand, as set out by the People’s Mental Health Report. UNICEF has highlighted the issue, ranking New Zealand as worst in the developed world for teen suicide. The impacts of poor mental health are far reaching, including homelessness, addiction, criminal justice.

The evidence on what works in mental health isn’t great. What we know for sure is that similar to education, a major driver of poor mental health is poverty. Poverty and its related problems all contribute to poor mental health through stress, overcrowded housing, chaotic lifestyles, living in a dangerous neighbourhood, a poor understanding of how to stay healthy, and less access to care.

The best way to deal with many of these issues is outside of the health system. Our Fair Tax Reform will put more money in the pockets of working families. Our Thriving Families policy will help support families, particularly families with children under five, and all poor families with children. Our climate policy will see a massive investment in housing insulation and energy efficient heating. This will be backed up by greater rights for renters including security of tenure and a Warrant of Fitness for rental housing.

These policies will make a difference long term, but we have a mental health crisis that needs urgent action. We do know that mental health services are best delivered in local communities (rather than in the health system), in ways that suit that community. Instead of putting mental health funding through the Ministry and DHBs, this could be a good opportunity to give local communities more say over the services that affect them as we set out in Democracy Reset.

This funding would be delivered through Local Authorities to work on ideas that suit the needs of the local community. Good examples include the People’s Project in Hamilton which helps the homeless get a home and the Evolve Wellington ‘one stop shop’ youth service.