We already rely on migrants to a large degree – we have more than twice the OECD average of foreign born residents (19.5%) (OECD). However, we need to do a better job of attracting skilled migrants; when compared to countries with similar immigration policy such as Canada and Australia the overall skill base of New Zealand migrants is much lower (Melbourne University, 2014).

New Zealand is in a unique position of being able to cherry pick those that wish to immigrate to our shores. However, current trends see the government walking a tightrope, in terms of public opinion, on the record number of immigrants coming into New Zealand. In 2015/16 we had 69,100 official migrants (MBIE), the highest net gain in our history, and this number is only predicted to grow under the current scheme. 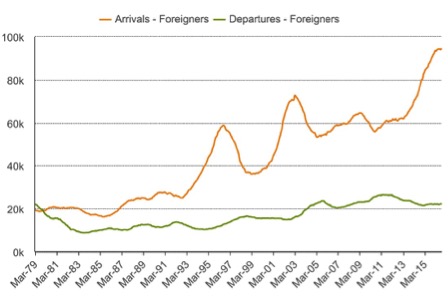 Most of the growth in immigration (particularly at the low skilled end) has come from two sources; working holiday visas and students.

Working holiday visas have topped 60,000 per year, and are arranged as part of trade deals with other countries. 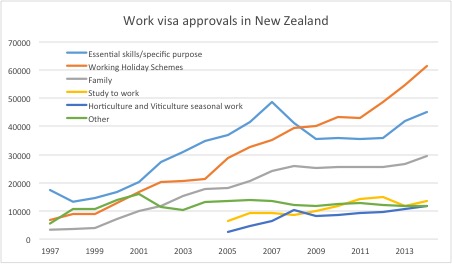 International student numbers have also increased in response to enrolments of locals in tertiary education decreasing. Given that government funding is linked to enrolments, these education institutions have to look at alternatives outside of the national market. This can, in part, explain the increase of 24% in the number of international students approved to study over the last two years (91,261 students studying in 2015/16), almost twice the OECD average (OECD). 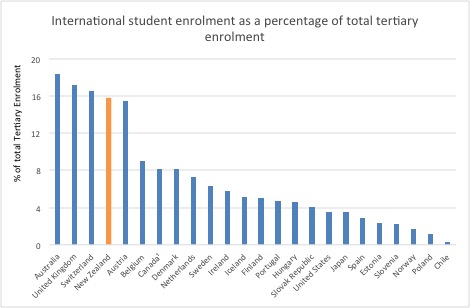 International students and working holidaymakers are a boon to our economy, as long as they are here primarily to study and holiday. If they stay afterwards, that’s good news so long as New Zealand is attracting the next generation of bright minds. However, it is clear that some of these people are not highly skilled, they have simply taken advantage of the loopholes the current system offers to those coveting residency. Much of the recent boom is due to people discovering this preference our immigration regime now confers on those who choose this pathway to residency.

Our definition of what “skills” are nowadays is underwhelming. The essential skills visa, where the top occupational categories for entry are for chefs and café/restaurant managers is illustrative. It is dubious whether these positions actually offer our country a net benefit in the long term as they can often be remunerated below our average wage (MBIE).

People here on student or Working Holiday visas are also taking advantage of the ‘currently in New Zealand’ advantage in securing their pathway to residency. 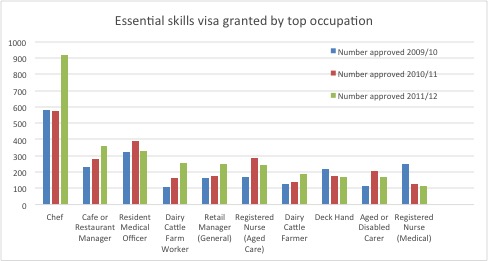 The flaw in the definition of “skilled employment” has resulted in a significant number of immigrants attaining the essential skills visa and using that to gain full-time residency. Again, the most common skill categories are for chefs, nurses, retail managers and café or restaurant managers.

As more migrants exploit the priority we’ve afforded foreigners already in New Zealand, the skill level of the new residents appears to be falling.

Of the students that gained study-to-work visas 43% went on to achieve residency within three years (MBIE). The major concern with this is that the skill level of these students is trending downwards as more students are gaining residence from courses below bachelor’s level. This makes it questionable that they will achieve a net gain to New Zealand society, especially considering New Zealand has one of the lowest earnings potential in the OECD for people with a degree, let alone without one (MBIE).

A by-product of the study-to-work visa is the extortion of students by some businesses looking for cheap labour. Immigration requirements mean that many students relied on jobs to maintain their visas giving some employers a considerable amount of power. Some incidents recently revealed are appalling with examples of students being paid as low as $3 an hour, or even not paid at all; other accounts tell of refused leave to see a doctor, and being forced to sleep on the shop floor. This treatment is not restricted to a small number of cases with one study from Auckland university finding 20% of international students admitting to being under paid (below minimum wage).

This extortion underlines the weakness of the system, which goes well beyond the study-to-work visa, with many seasonal/temporary workers experiencing similar discrimination. With temporary immigration making up such a large portion of our workforce it is important we clamp down on the exploitation, but the principle flaw in this system remains that temporary working visas should not be a preferred path to residency. That just invites foreigners here, waiting to get approved for residency, and makes them easy targets for unscrupulous practices – which of course undermine the competitiveness of honest employers, not to mention makes it harder for locals to get work.

New Zealand is grossly underperforming when it comes to our acceptance of asylum seekers per capita; to regain international respect we must rectify this. Many refugees are highly skilled, so there’s a strong case to at least increase acceptance rates of these people.