Last week The Opportunities Party released its policy on economic migration. In short we conclude the situation is a mess as politicians have interfered and over-ridden a tried and tested immigration strategy that gives priority to migrants that boost the wellbeing of New Zealanders. The politicians have become obsessed with building a foreign education sector here and have sacrificed our immigration policy at the altar of that ambition.

They’ve done that by giving foreign students 60 points toward residency for just being here. Needless to say we have a tsunami of economic refugees seeking a better life, enrolled in courses here, not because they want education, but because they want entry. Many of these people do not satisfy a definition of a skilled migrant and are glorified dishwashers, cab drivers and supermarket stackers. Meanwhile our best companies continue to search for much needed skills.

It is a scandal and is exactly what happens when politicians try to pick winners and over-ride well-established and successful strategy.

Our Smarter Immigration policy focussed on the bulk of migrant numbers. We did make the point that if we get smarter on economic migrants as a country we could afford to take on more refugees. We’ve had a number of questions for more detail on this point, which I’ll respond to in this blog.

On refugees New Zealand is also outstanding – and not for the right reasons. In June 2016 our government announced it would lift our quota of refugees from 750 pa (that was set 30 years ago) to 1,000 - but not until 2018.

One of the best practice responses to the refugee crisis from distant (as opposed to proximate, or neighbouring) countries is that adopted by Canada. As opposed to Europe, where displaced persons and economic refugees have just arrived, pouring over their borders, Canada’s approach is totally voluntary and reflects that country’s commitment to expressing its values in the face of horrific persecution of innocent civilians.

Canada has a population of 35 million, has a government-funded programme of 15,000 refugees per annum and a special programme of private sponsored and joint government/private sponsored that brought in 25,000 Syrian refugees over 2015/16. If New Zealand were to match that approach, then our programme would lift from 750 pa to 2,000 plus a further 3,000 sponsored. That’s a huge difference – I’m not sure New Zealanders realise how bad New Zealand is here, certainly our name abroad is lousy.

Of the developed, high income countries, Germany has done more again. Even Australia – not exactly known for opening its arms to persecuted persons – has a refugee undertaking of 5 times New Zealand’s per capita. As the article states, our politicians like to say we’re 6th or 7th on world rankings but they deliberately tell the half truth that reflects just our quota, where most countries take in asylum seekers who don’t wait for quota. Being so remote we don’t get mny of them (about 50 pa). So the relevant benchmark for us is Canada – we’re pathetic. 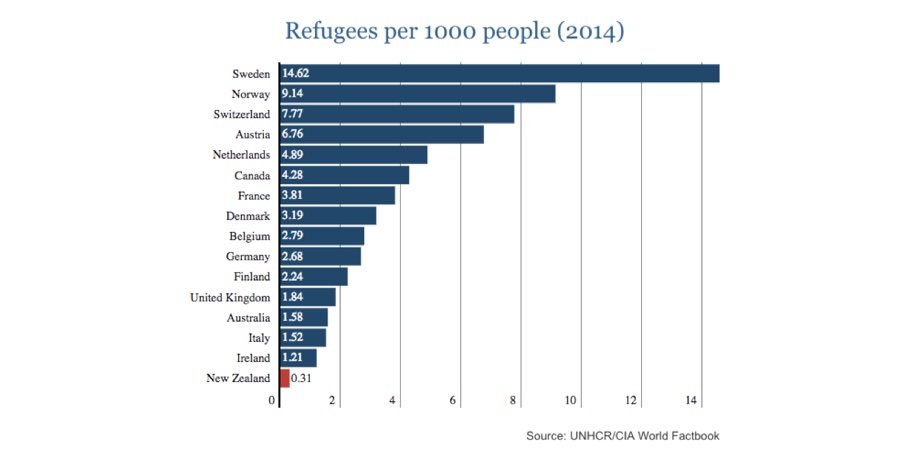 That is quite a gap. Are we mean, or do we simply refuse to do more than the minimum, or are we just blissfully unaware or desensitised to the plight of persecuted people?

Now I’m sure we don’t mean to be mean, we’re not inherently a stingy population, we’re just sheltered from reality by Establishment politicians who don’t like to risk votes by standing up to vocal opposition from Xenophobes.

Let’s be clear first of what a refugee is and not confuse them with immigrants.

Immigrants are driven by desire for an easier and more rewarding life, attracted most frequently by economic factors, and at times just want to be close to family. On the other hand Refugees are forced to relocate for reasons such as persecution due to war, religion or political opinion. Their lives are in danger – that is an altogether different level of need.

So here’s TOP’s approach to genuine refugees – those persecuted and with their lives under threat;

Lift the quota from 750 to 2,000 immediately (rather than 1,000 in two years time). And as well, empower New Zealanders directly by allowing us to start our own private refugee sponsorship programme, where individual New Zealanders or groups of New Zealanders simply step up and enter a sponsorship programme in conjunction with our government as Canadians do. I suspect the size of this will be limited by the numbers of Kiwis willing to take direct action rather than any quota the government sets – so let’s see how say 300 (of the 2,000 quota) taken in under such sponsorships goes, and work from there. 2,000 is more than other parties are promoting, but then I’m not sure they’ve done their homework and seen just how mean spirited New Zealand’s current approach is.

Of course it won’t be plain sailing, adjustment of refugees to new lands, new traditions, new social norms is never straightforward. From some of the current theatres of war, males in particular, struggle to adjust their ‘cultural mores’ to a world where all humans have equal rights and their status doesn’t derive from the luck of being born male. But hey, so long as we have eyes wide open, these hurdles can be taken on as the Canadians have and we can learn from Canada. There’s some really interesting articles on the Canadian experience for Syrian refugees published in the New York Times and they illustrate that it is anything but plain sailing. But what value life?

Come on Kiwis, call for a better humanitarian response. Don’t let the Canadians wipe the floor with us on this.