Steven Joyce and Bill English like to parade the ”strong economy” as one of National’s achievements. I’m not sure what the boys are on, but any robust appraisal of New Zealand’s economy since the Key government came in shows mediocre performance at best. So if this what they think as “strong” I’d hate to see what they expect when we hit turbulence.

I hope everyone remembers the John Key pledge that National would take our economy from the bottom half of the OECD to the top half. Well sorry fellas, you’ve achieved nothing in that regard. Someone’s been dreaming. 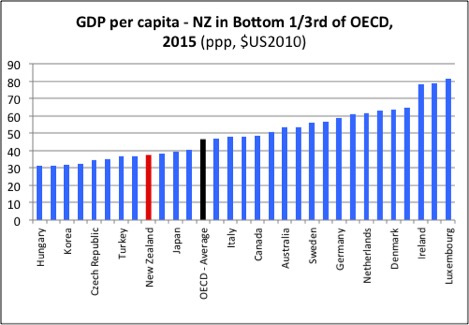 Got that Bill, got that Steven – you have not made a difference- so what are you on about? We have been treading water, no better – stuck fast in the bottom half of the OECD, sitting between Eastern European powerhouses of the Slovak Republic and Slovenia.

GDP growth per capita since 2008 when the Nats stormed back has averaged 1% per annum – smack on the average for the OECD. Yes, because of immigration the size of the economy has been growing faster than this. But hey what matters is whether immigration has boosted New Zealanders’ incomes – and on that front the news is all bad. It has not made one iota of difference. Growth in GDP per head has been no more or no less than the OECD average. In other words, many OECD countries are expanding the incomes of their citizens faster than our so-called “strong” economy has managed.

Actually with total GDP trucking along at around 3% pa and population rising around 2% - the resultant 1% growth in income per head is only half of what it averaged in the years prior to the 2007 GFC.

This is the tale of the two economies National and Labour have delivered us since 1984. Some of us are fine, getting more and more of the income growth; others are up against with flat incomes, soaring accommodation costs and all the stress that poverty brings.

Our low wage, treadmill economy is a direct result of the policies pursued by the last few governments. . It is more than galling to see a couple of be-suited political journeyman stand there and tell us the economy is “strong” when all around us are appalling social indicators..

They’re either fibbers or just haven’t got a clue.