Labour have reignited the immigration debate with their new policy, which is broadly similar to ours. The most interesting aspect of the debate has been the response of the National Government. None of their justifications for the current situation seem to stack up, so the question is what is the real reason behind their policy? The only explanation we can think of is that they are trying to build a low wage economy.

Let’s revisit some of the key facts that formed The Opportunities Party’s (TOP) policy on this issue. We know that immigration can make a small but positive contribution to the well being of local New Zealanders if handled right. The issue is, what does “handled right’ mean. In general it means relieving skills shortages that cannot be satisfied locally, providing investment or opening new markets. In other words a bit of immigration is good, particularly if it is highly skilled.

On the other hand if you have too much or the wrong kind of immigration you can see pressure on infrastructure, and wages suppressed at the bottom end. That seems close to the the current situation. In the long run this could lead to a backlash against immigration like we have seen in the United States and United Kingdom, and none of us what to see that.

On that basis Labour’s policy seems to have struck the right general note. In addition to their changes to the student visas, TOP would like to see a cap on the working visa reciprocal arrangements with each country so they can’t send more to us than we do to them. Working holiday visas are a major source of the migrant growth, and are generally working in low skilled industries. TOP would also be far more aggressive than any other party on attracting the key skills we need such as developers.

National’s game of distraction and fear

To their credit National dealt with the dairy downturn by increasing immigration. At the time this kept our economy going, but they never closed the tap and now we are seeing the consequences of that loose immigration policy.

National’s response to the Labour policy is to distract people and play to our fears. The distraction is claiming the big immigration numbers are due to Kiwis not leaving. Sure, on balance Kiwis are not leaving like they used to, but this situation isn’t unprecedented; we saw this in the early 80’s and early 90’s. Meanwhile foreign arrivals are at a record high as the graph below shows. Sorry National but you can’t complain that you have been caught by surprise on this one. 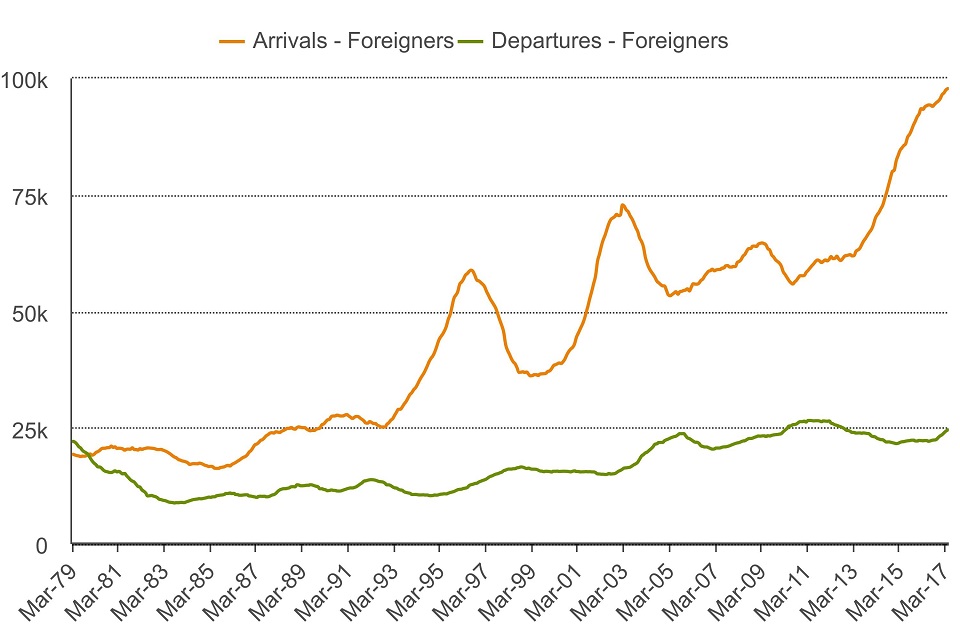 The other appeal from National is to our fear; that if we reduce immigration we will kill growth. It is true that migration got us through a tough spot in 2013, but this sort of population growth is not a sustainable growth strategy long term – at least not without a much bigger investment in infrastructure, particularly denser inner city housing and public transport in Auckland. And we certainly don’t want to grow a foreign student sector if it is based on low level training and the promise of a back door to residency.

What is really going on here?

At the centre of the issue seems to be National’s "Think Big” approach to building the foreign education industry. Those numbers have come off over last year as they crack down on the scams, but there is still a long way to go to sort out that industry. Meanwhile, working holiday visas numbers are still climbing fast. These visa holders are flooding low skilled occupations (like waiting staff), locking out Kiwis from these jobs and stopping wages rising.

There has been a predictable response from these industries to Labour’s planned changes, and there would be more yelps if we cracked down on working holiday visa holders. They claim that they couldn’t fill their jobs and businesses would close. There is an alternative; pay people more. More Kiwis will enter the labour market, and those businesses that can pay more will attract people wanting to work, while others will close. That is is how the free market should work, pushing up wages at the bottom end.

In defending current settings, National’s strategy seems to be to build a low wage economy. Under their policies it seems that employment is rising fast and yet there is no wage pressure. This is great for employers of low skilled labour but is it good for workers and our society? That is the question we all need to ask ourselves.