While household incomes have gradually risen since 1982, wealthier families have seen a much greater rise compared to those that earn an average or low income. Recent trends show this is only getting worse, and those on the lowest incomes are falling further behind. In fact, those in the lowest 10% of earners (P10) are barely better off than they were 30 years ago, while the upper echelon (P90) has enjoyed a 50% rise in real incomes. 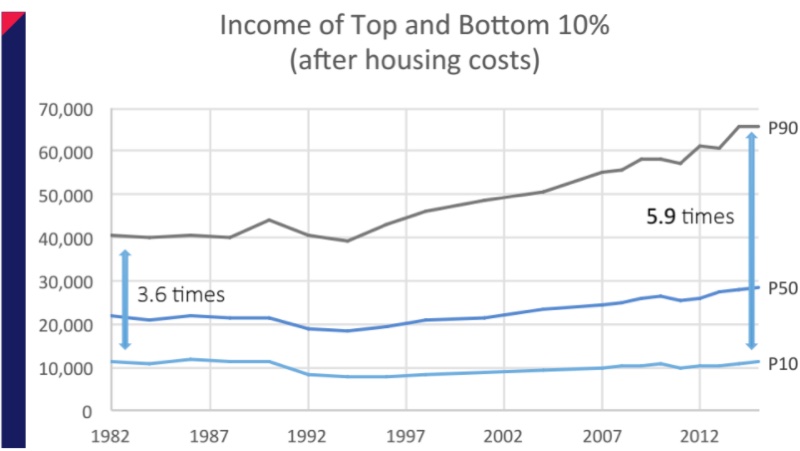 As measured by the Gini coefficient*, inequality of incomes first blew out during the 1980s and early 1990s when both the highest tax rates and welfare benefits were cut. That gap has never closed, the promised “trickle down” was a lie.

(*The Gini coefficient is a measure of how far the economy is from total equality of income – 0 is total equality and 100 means one person owns everything.) 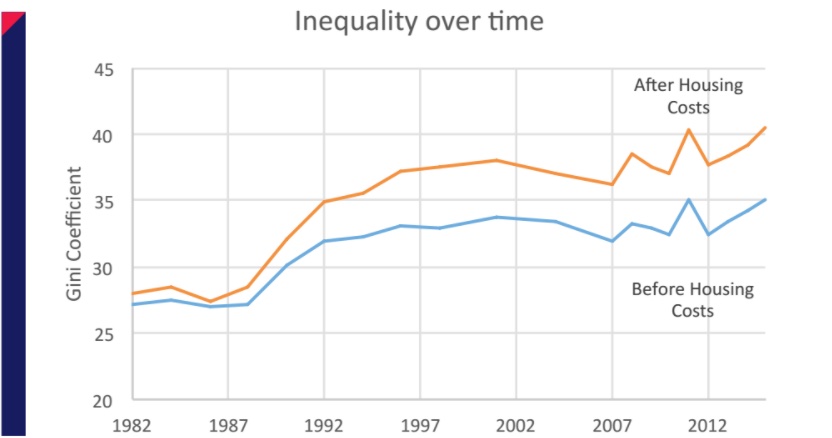 The growth in inequality was most stark between 1988 and 2004 when the highest earners grew their income by more than 30% whereas incomes of the lowest third of earners actually decreased. Income inequality in New Zealand rose rapidly in the 1980s and 1990s, more than anywhere else in the developed world (OECD). 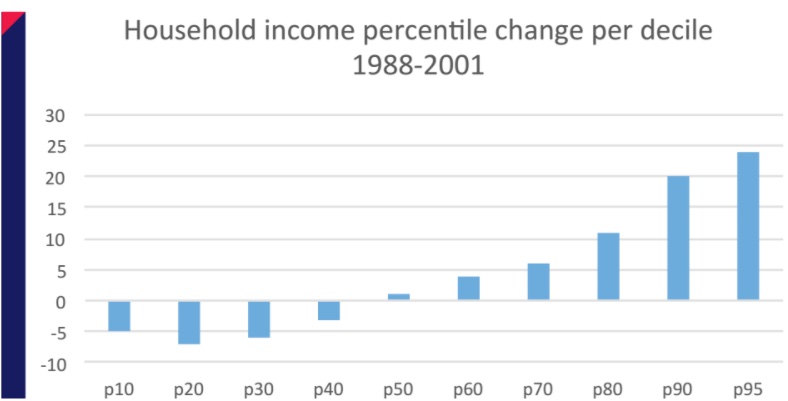 The implementation of Working for Families over the 2004-2007 period provided a partial respite for middle and low earners, but the package hasn’t enabled any of the ground lost in the 1980s and 1990s to be recovered. 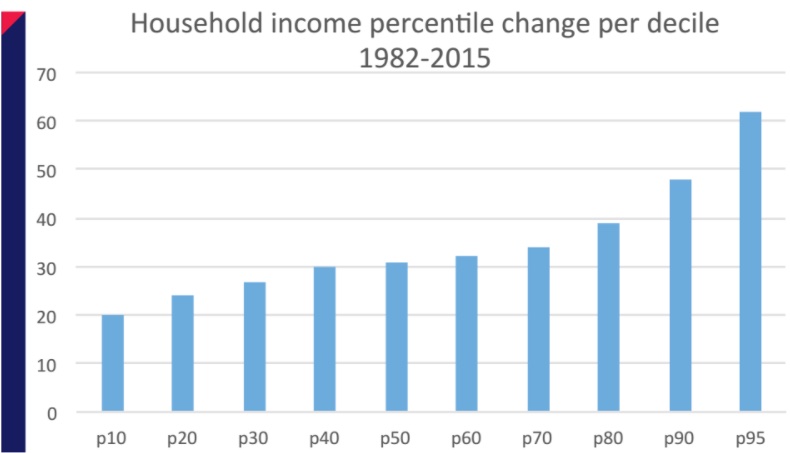 There is considerable data confirming the issues surrounding inequality in New Zealand; the bottom line is that it has been ongoing since the dose of Rogernomics and Ruthanasia some 25-30 years ago. The glaring failure of that liberalisation to serve the interests of the middle to lower income groups means a considerable portion of our society has been left behind.

The uneven nature of salaries and remuneration packages for senior public servants and CEO’s in New Zealand not only accentuates overall inequality but is also a source of frustration for regular hardworking New Zealanders. There are of course justifications for many high salaries, but when the CEO of the Auckland DHB has a salary increase of $180,000 compared with $951 for a registered nurse, questions should be asked.

Income disparity is just the tip of the iceberg when it comes to assessing inequality. The wealth of New Zealanders has continued to be concentrated more and more at the so-called “top” echelon of our society. Often confused with income, wealth is the measure of all assets of worth owned by an individual, rather than just the money coming in each year. These inequalities in wealth are even larger than those for income with the top 20% of households in New Zealand holding more than 70% of the wealth (Statistics NZ) This was only 46% some 30 years ago (Easton, B).

The inequalities in wealth become even more stark when we look at how different ethnicities compare. Not only are we seeing the wealth siphoned into the hands of the top 20%, we are seeing this at the expense of our heritage and cultural diversity.

Increasing Price of Housing vs Income

More recently a new threat hangs over folk on both middle to lower incomes and those of modest wealth – rising housing costs. Both house prices and rents have been growing faster than incomes for some time. 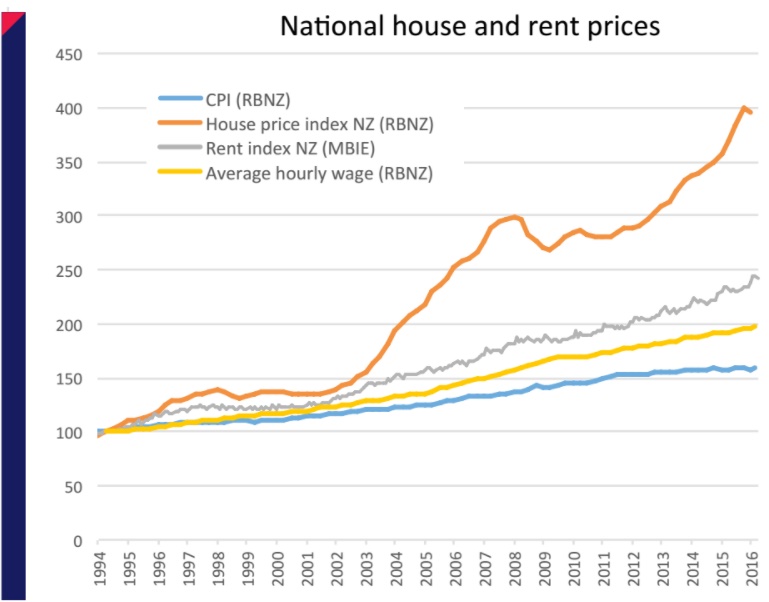 Those price rises have come about mostly because we are speculating on land value, not because the costs of building a house have increased. 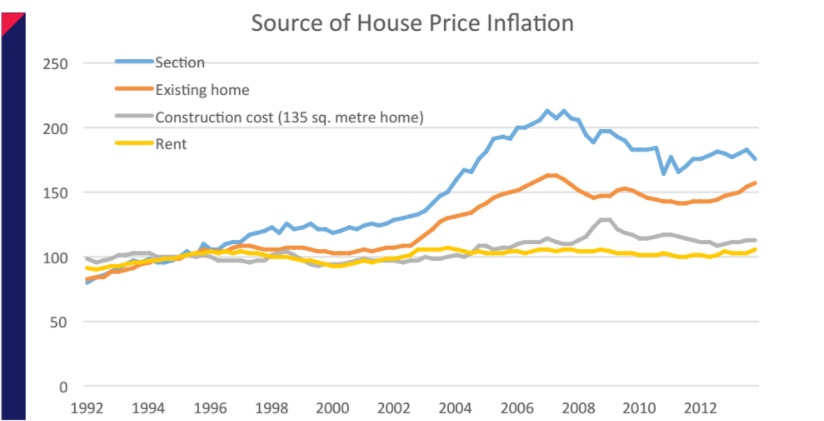 As a result, more Kiwi households are spending more than 30% of their income on housing (the percent that is considered the threshold at which housing is considered as being ‘unaffordable’). This is particularly a problem for those at the bottom end. 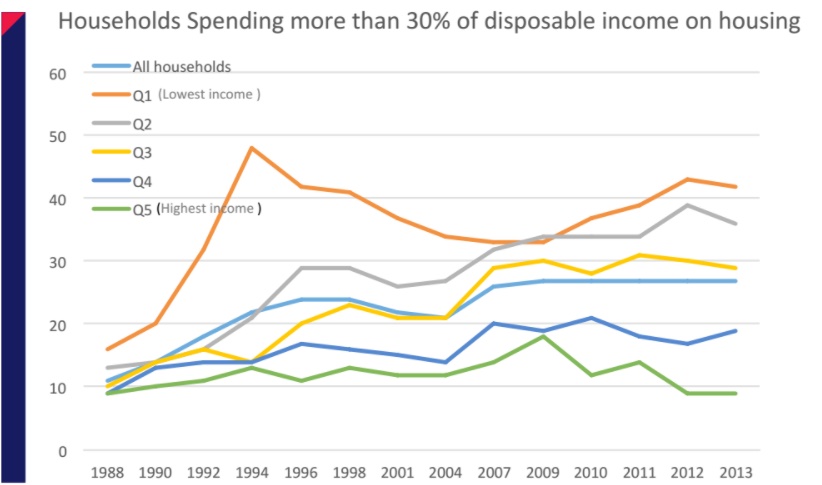 When the cost of housing rises faster than income, this further exacerbates inequality. Lower income families spend a much larger portion of their earnings on basic needs like food, housing, and clothing so as the price of housing increases these families have have less to spend on other basic needs. While inequality in overall income hasn’t got worse over recent years (having gapped substantially when Rogernomics and Ruthanasia hit), the effect of an increase in rent prices has meant the gap between rich and the rest has continued to widen. 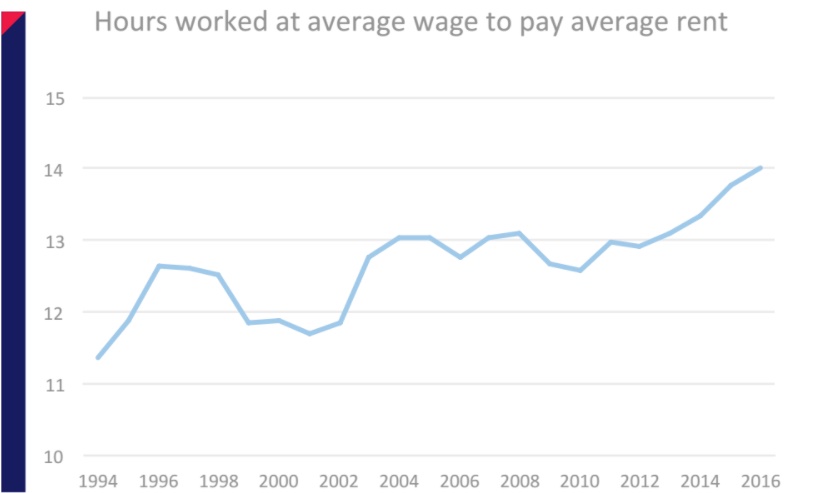 Sure enough, when we revisit the Gini coefficient for incomes after housing costs, we can see two things; firstly that the tax loopholes around housing created in the 1980s started adding to the growth in inequality; and secondly that when we take housing costs into account, inequality is still growing today.

Internationally, house prices are considered the leading contributor to growing inequality. The stable share of all private income that goes to capital masks the fact that it is actually falling if it weren’t for the rising portion going to housing.

New Zealand’s cost of housing is high by international standards (and that isn’t because our houses are better quality!) 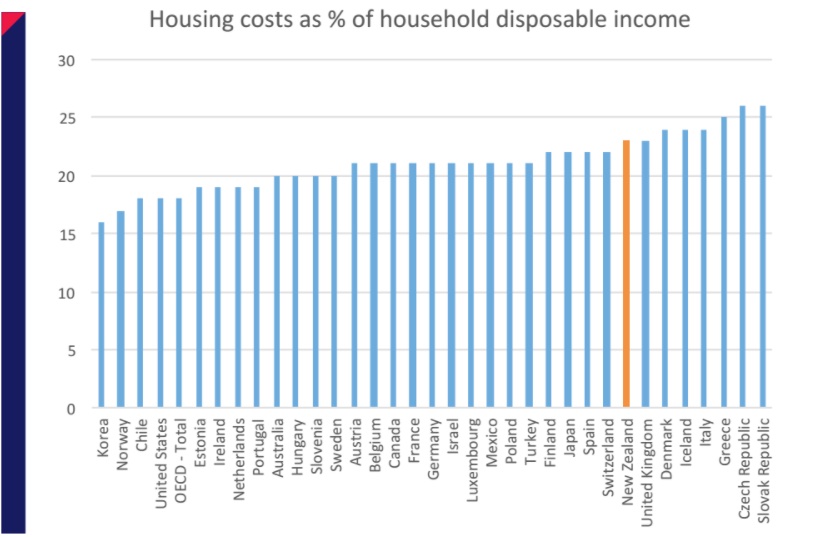 A direct comparison to Germany shows how drastically the cost of housing in New Zealand relative to income has spiralled in the last 15 years. Especially considering less than 20 years ago houses in New Zealand were more affordable than in Germany.

Rapidly rising house prices put a considerable strain on both low and middle income families to maintain their standard of living; it also puts pressure on the overall economy. A similar situation to that we are facing in New Zealand occurred in the Irish economy during the mid 2000’s. This price boom was unsustainable and contributed to a price crash, which threw the country into recession.

Other successful economies such as Germany and Switzerland have demonstrated that it is possible to keep house prices stable over time.

Of course a rise in house price is more sustainable if incomes are rising also, and rising incomes did partly explain the Irish boom of the 2000s. On a house price to income ratio New Zealand now looks more unsustainable than Ireland did before its bust. 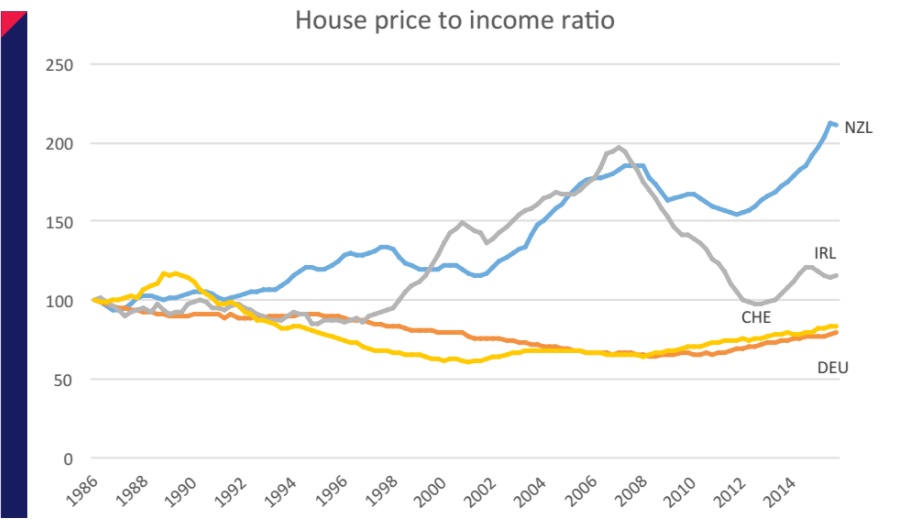 These two factors have resulted in New Zealand sitting at the top of the list of OECD countries when looking at the growth of house prices to income. 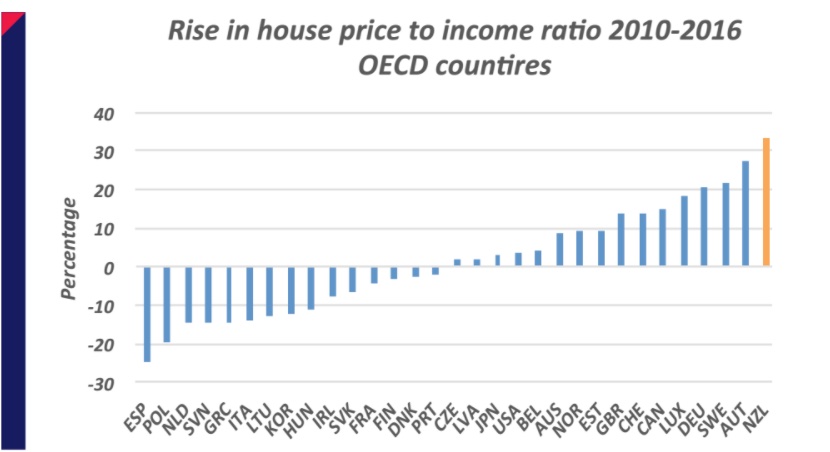 And the threat to economic stability is clear in the face of growing levels of debt: 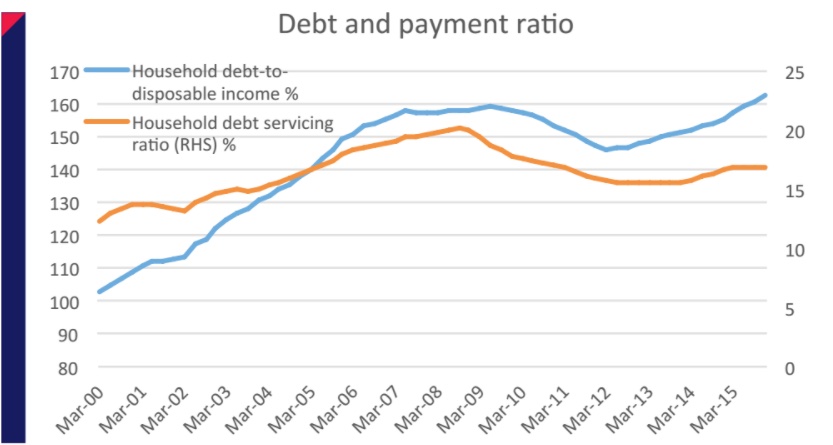 One of the consequences of growing inequality, no matter whether you measure it just by income, or by income left after housing costs, or by wealth where the gaps are growing even faster – is that people get disillusioned, feel disenfranchised and lose confidence in “the system”. There is considerable evidence for this in Western developed countries as the market liberalisations of the 1980’s, the onslaught of globalisation and the ever-rising political power of elites have taken hold. Indeed the whole confidence
in democracy as a system that can deliver the goods for those who aren’t in the top echelons of income and wealth has been declining for some time. 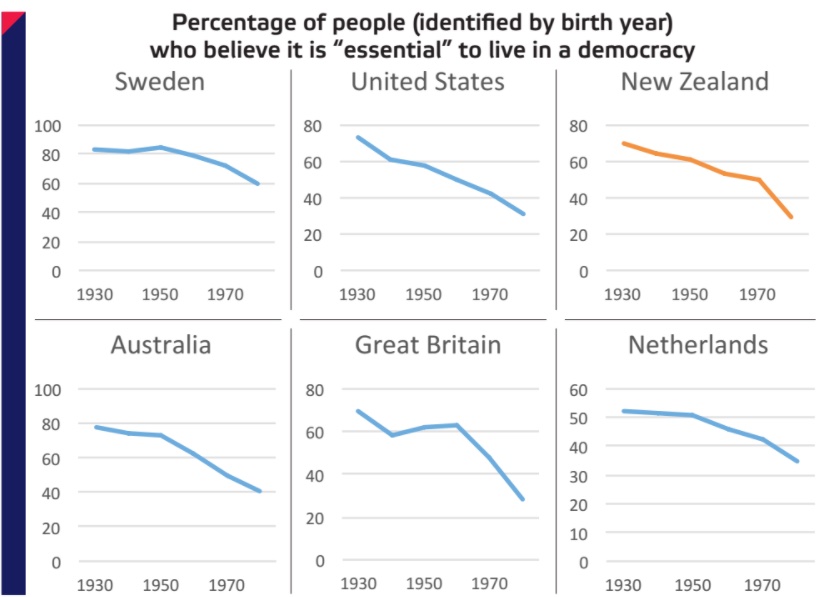 This is a significant difference in opinion on preserving democracy between young and old. In the US 43% of oldies see it as illegitimate for the military to take over if the government is incompetent, yet only 19% of millennials feel like that. And in Europe the numbers were 53% and 36% respectively. The generation divide – wherein younger ones feel our so-called “democratic” government is not serving their
interests – is stark.

New Zealand is no exception to this trend in disillusion as the voter turnout figures show. We will have more to say on this when we release our policy proposals for “Democracy Reset”. 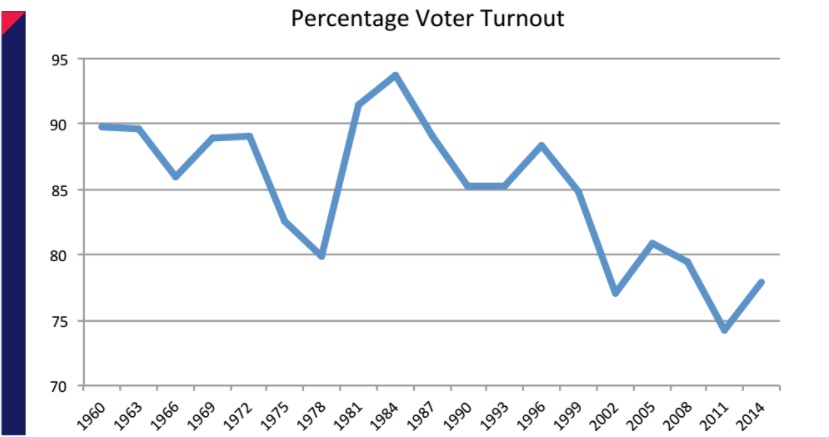 Perry, B. (2016) Household incomes in New Zealand: Trends in indicators or inequality and hardship: Ministry of Social Development Wellington

Easton, B (2010). Income and Wealth Distribution: Te Ara –
the Encyclopaedia of New Zealand. Retrieved from http://www.teara.govt.nz/en/income-and-wealth-distribution/page-1

Mounk, Y and Foa, R (2016). The Signs of Democratic Deconsolidation: Journal of Democracy.