Prison isn’t the solution. If it were, we would know by now. TOP's objective is a justice system that focuses on rehabilitation rather than incarceration.

New Zealand is stuck in a vicious cycle. Every year we lock up more people. That doesn’t tackle the causes of crime (which are more about social and economic conditions – addressed by some of our other policies). The evidence, in fact, suggests that prison is one of the significant causes of crime. Given that, it is just not smart for our criminal justice system to keep locking up more and more people. 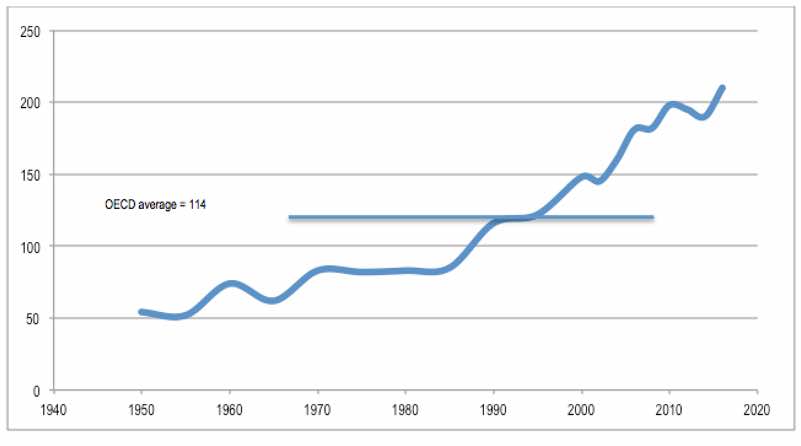 As a proportion of its general population, New Zealand has the 2nd highest prison population in the western world (after the United States). It is 84% higher than the developed country average of 114. This fact alone should be enough to ring alarm bells and make policy change a priority.

Every year we lock up more people, many of whom need help with basic literacy, mental illness and drug addiction. Prisons are not good places to deal with these problems. But worst of all, prisons nurture crime – they help criminals to network and gangs to recruit.

Prisoners are not the only people affected, so are their families. At any one time, something like 20,000 children have a parent in prison, and sadly those children are 5 times more likely to end up in prison than a child whose parents are never in prison.

No end in sight

Our current criminal justice policy will almost certainly see a steady growth in the prison population. The Government acknowledges this when it tells us it is spending $1bn on a new 1,800-bed prison. By our calculations, it will need another $1bn prison by 2025.

Successive Governments have tightened bail conditions, lengthened custodial sentences and made parole harder to get; in short, put more people in prison for longer. These are the drivers of a soaring prison population. Given the evidence that prison is not the answer, this has to change.

Our objective is a justice system that focuses on rehabilitation rather than incarceration. We want to get the prison population down from 210 to near the developed country average of 114 prisoners per 100,000 of the general population, or a total of no more than 6,000, by 2027.

We calculate that the difference between reducing the prison population to 6,000 over the next 10 years and allowing it to steadily grow is conservatively $4.5bn. This money could be better used to kick start a virtuous cycle of rehabilitation, reduced crime and lower costs (as well as on better social policies and/or tax cuts). Scandanavian countries have successfully used this recipe to reduce the prison population and reduce crime at the same time. Other countries and several States in America are now following suit.

Getting positive not more punitive

TOP will reverse the changes made by the Bail Amendment Act 2013.  The Act assumes some people are guilty until proven innocent, making bail harder to get with the result that the remand prison population (people awaiting trial or sentencing) is now almost a third of the prison population.

The savings from lowering the remand population will be invested in parts of the criminal justice system that are known to reduce offending and are cheaper than prison:

Many offenders end up in prison not because a judge believes that it is best for the community but because the court has no other good options. We need to invest in programmes that give judges other options and are focused on genuinely rehabilitating offenders rather than the dumb and lazy option of imprisonment.

For example, the US justice system has had success with ‘Parenting with Love and Limits,’ a 20-hour program for parents of children with serious difficulties. Juvenile offenders take it rather than go to prison. For each dollar spent on it, there is an estimated benefit of $22.91.

New Zealand will not simply copy the US; we have our own innovative solutions, but they almost never get properly evaluated and expanded if they work.

We will dial back legislation that strips the rights of prisoners and undermines their ability to reintegrate into society: return to prisoners the right to vote in elections; repeal the ‘three strikes’ regime; amend the Parole Act, and strengthen the Clean Slate Act.