We’ve had some questions about our immigration policy TOP Policy #2: Smarter Immigration released last week. Remember the TOP test for immigrants is: if you can improve our standard of living we welcome you. If not, thanks but no thanks.

One particular issue we raised is that we have too much low skilled, temporary migration. There are signs that this level of temporary migration is having an impact on the bottom end of our labour market, and we will set out the evidence in this blog.

Very simply, if you increase supply in any market, you could expect to see the price (in this case, wages) fall and the quantity (in this case employment) to rise. The exact proportions of these changes depend on the conditions of that particular market.

At one extreme we could see no increase in employment overall and a fall in wages, which is the worst-case scenario. At the other extreme we have the best-case scenario; that wages don’t fall at all and employers simply take on all the new workers. There has been an element of this in the hospitality sector for instance, where foreigners on their OE have provided employers with a high calibre of labour for minimum wages. But as well as those cases we see a surfeit of temporary workers leading to almost slave labour exploitation as these folk are helpless while holding out for their chance at residency.

Of course if the country has skill shortages and we increase the supply of those types of folk, the impact is more likely to be the best-case scenario. This is why skilled workers tend to have a positive impact, particularly when we consider that they can create whole new businesses and jobs.

But such an ideal outcome is far from certain for this flood of low skilled foreign workers hanging around the New Zealand labour market nowadays. Consequently the worst-case scenario is far more of a concern for our own low-skilled workers. They can end up competing with desperado migrant hopefuls, resulting in lower wages or even increasing unemployment. This just puts more costs on the New Zealand taxpayer. Another big concern is that our low skilled workforce tends to be younger, and is more likely Māori, so there could be long term implications for the country (including possible Treaty breaches) from excessive low skilled migration.

The question is, what happens in reality?

What happens in reality?

In the past, studies have shown that migrants tend to have more of the best-case scenario impact – wages don’t drop and employment expands. Of course this is very difficult to measure accurately; perhaps without the migrants, wages would have grown, perhaps they wouldn’t. And the authors of this study pointed out that it was conducted at a time when the economy was booming, and migration was at lower levels than it is now. They explicitly said that the results may not apply if temporary, low skilled migration continues to grow.

Which is exactly what has happened. All three sources of temporary low skilled migrants; students, seasonal workers and most importantly working holiday visa holders have increased rapidly in recent years. 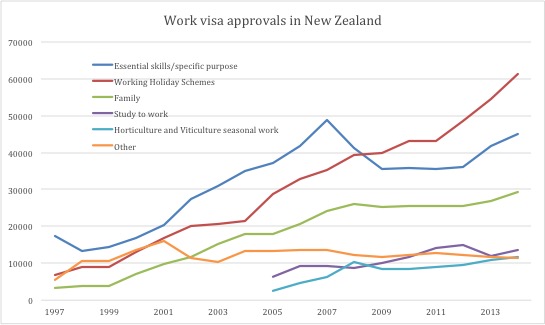 This has sent warning bells ringing in the OECD and Treasury about the impact of temporary, low-skilled migration on our local population. The OECD pointed out that at 3% we have one of the largest flows of temporary labour flows as a proportion of our population in the OECD, and this was back in 2014.

The question is, can we see the impact of this influx on our labour market? Perhaps we can. Unemployment is at its lowest point since 2008, but youth unemployment figures haven’t followed suit.

Again, it is very difficult to disentangle what has happened in reality without very complex modeling, but the data on young people provides an interesting picture. Overall the numbers of young people not in employment education or training is up from 2007. The numbers are even more interesting on a regional basis; many of the strong tourist regions (Northland, Gisborne/ Hawkes Bay, Tasman and Otago) are showing the greatest signs of stress on the youth labour market. 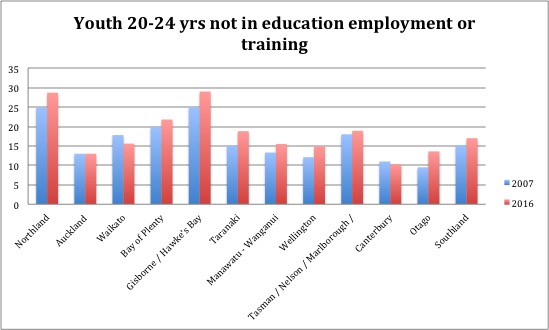 To us this, along with the abuse of migrant labour, presents a pretty strong case to look at these issues. This is why we have suggested a review of the Working Holiday visas.  The use of student visas as a backdoor to residency – as we highlighted in our Immigration Policy – demands more urgent action.