Firstly an admission - personally I don’t want 10 million people living in New Zealand which is how many the current rate of immigration will deliver in 40 years. One of the things I love about coming back here from overseas is the fact that we have so much space. But that is just my selfish opinion, and this is a democracy. I’m interested to hear what other people think and why.

Some people might want 10 million people living here, to recreate some of the buzz and culture that can be found overseas. Others might be happy to have 10 million, as long as they are the right 10 million – that is people that will make our country a better place to live in. 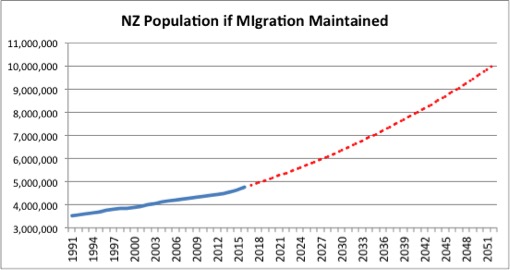 Only if carefully managed does immigration actually lift the incomes of people in the host nation. And even then the evidence tells us the effect on our incomes while positive, is small.

That leaves plenty of scope for a government to get it wrong and open the spigot to low skilled migration that does little but suppress wage growth, raise inequality and lift average but not median incomes. This is the legacy of the current government. And despite its belated attempts to improve the quality of migration – i.e.; the average skill level – there is little to suggest that a serious attempt has been made to stop the policy.

Indeed just a couple of weeks ago the Minister of Immigration pledged to meet labour shortages by letting in more people, rather than countenance wage rates rising. How on earth National expects wage earners to do better under its policy regime is a question New Zealanders need to ask. 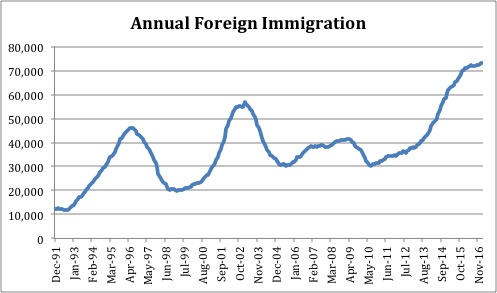 As a strategy, sacrificing quality for quantity of migrants is a recipe for disaster for the most vulnerable people in society. Raising the supply of those people will suppress wage levels and will ensure that taxpayers have to pay more and more out through welfare benefits such as Working for Families. My question is how else are our own modestly-paid supposed to share in the prosperity that is evident in the overall GDP numbers?

It is highly skilled workers that create wealth and the sooner the immigration policy rediscovers this truth the better. The quantity mantra is not only putting strain on infrastructure, it is accompanied by wall-to-wall corruption in immigration practices. The troubles for the foreign education sector have already been well documented but there’s frequent anecdotal evidence around general immigration practices also being corrupt as desperate low skilled foreign workers pay off employers to falsify their reported salaries in order to meet residency requirements. There is no reason to believe the corruption is restricted only to the foreign student education sector.

Expanding the size of the economy through stoking the numbers of foreign migrants while the inequality gap is widened even further, and the modestly paid are trapped on wages below that require to live on, is a curious way to improve New Zealanders’ lives. It is of course a strategy to improve the incomes of some at the expense of others and so I would say it has to stop.

At the rate we’re going New Zealand will be changed forever, the things we value such as being a small but well-off society living in a land where our most precious commodity is personal space and environmental health, are being sacrificed at the altar of economic prosperity for some.

10 million New Zealanders by mid-century, with immigration of the sort we’re sponsoring, leaving many trapped in low paid jobs is not a New Zealand that I covet.

In fact even if migrants bring skills with them, and we can overcome the short-term infrastructure issues, there are still pros and cons to continuing to increase our population indefinitely. That is why the Opportunities Party agrees with economist Shamubeel Eaqub in calling for a population strategy.

But a population strategy has to begin with you deciding how many people you want living here. Just in our own office the disparity of views and reasons people have for their view has been so wide that it tells me we need to see what the public think, whether there’s any common ground out there on this.

It’s important to appreciate is that we don’t necessarily have to have population growth of anything like the current 2% per year in order for our per capita incomes to be rising – they are separate issues.

Fill out the quiz and let us know what you think our ideal population number is. Got more to say? Let us know in the commments below