It appears that the Tax Working Group is quietly dropping the idea of a Capital Gains Tax, although the Labour-led Government is still talking up the possibility. This isn’t surprising. Despite the fact that the Government’s Terms of Reference didn’t leave the TWG with a lot of room to move, experts will struggle to find much evidence to support a Capital Gains Tax (CGT).

Why a CGT is a Bad Idea

A Capital Gains Tax excluding the family home has largely failed in controlling house prices overseas. Countries with a CGT have seen a similar rise in house prices, and still face similar challenges with affordability. At best a CGT has simply taken the edge off their real estate booms.

Why does CGT fail to solve the problem overseas?

Firstly it exempts the ‘family home’. Given that this makes up a 60% of houses and a large percentage of house purchases, it won’t act as a disincentive for bidding up the price of housing. Exempting the family home means that John Key would still not pay any tax on the sale of his $20m Parnell home. As I’ve argued before, we simply can’t have a fair and efficient tax system with an exemption on the family home.

Exemptions also cause all sorts of problems in the working of the tax system, as we can see overseas. The fact is that rich people can afford an accountant, so they are much better at exploiting exemptions than you or I. The concept of the family home may seem simple, but in reality it is difficult to define for a tax authority. Some 42% of New Zealand’s wealth is in owner occupied housing. Just watch that number go up if it stays tax exempt.

Secondly, capital gain is only one of the tax loopholes that encourages overinvestment in housing. The others are excessive use of write-offs and the tax loophole on imputed rental – the value that an owner-occupier gets by living in their own house rent free. The Tax Working Group shows that it is this last loophole that is the greatest. See the graph below? The lowest taxed investment – by a long way – is owner occupied housing. No wonder Kiwis have piled in, putting almost half our national wealth into our “family homes”. 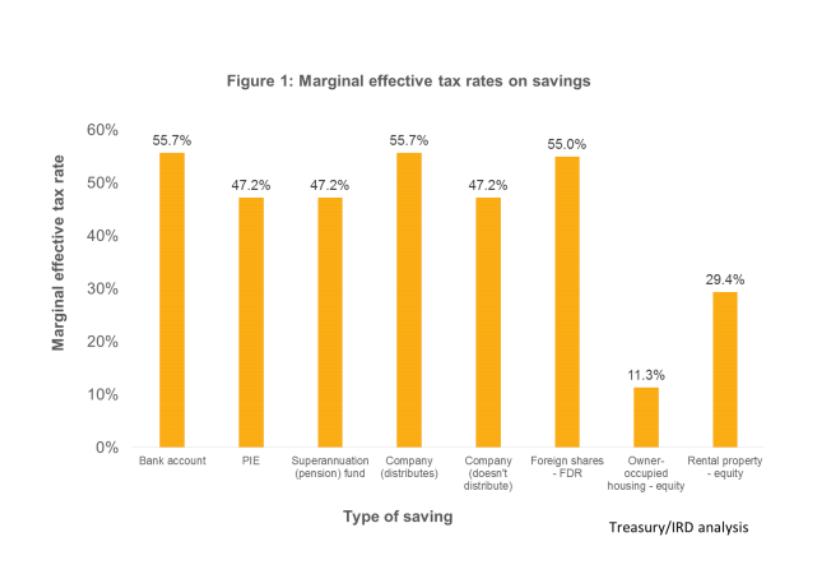 Imposing a CGT won’t close the gap with other investments, so there will still be a strong tax incentive to invest in housing. Closing one loophole won’t prevent speculation so it won’t stop capital gain from happening; it will only tax that capital gain (sometimes).

Finally a capital gains tax is horrifically inefficient. The tax is levied on the sale of an asset, so it provides a strong disincentive to sell any asset – whether that be a business or a home. This comes at a cost - reducing the efficient working of the economy. In other words what is the best way to avoid a CGT? Don’t sell your asset. Ever.

What Wealth Taxes Would Work?

For a wealth tax to work it needs to be difficult to avoid and not result in double taxation (taxing assets that already pay sufficient tax). CGT fails at the first hurdle as it is levied only on sale of the asset and excludes the family home.

A land tax has been much discussed as an alternative. It is a simple tax, levied annually as a percentage of land value. This would stop price increases and is very difficult to avoid. The big advantage is that it encourages empty land to be developed in order to pay the tax. However, it suffers from double taxation – for example a farmer may be paying a high level of tax on their profit from working the land but she still gets stung with paying a land tax. This usually leads land tax proponents down the road of exemptions, which quickly gets much more complicated than it first seems. Meanwhile non-land assets like gold bars continue to pay zero tax.

TOP’s alternative is to ensure all assets pay a minimum level of tax. It too is paid annually and difficult to avoid. However the advantage over a land tax is it avoids double taxation while taxing any non-productive asset. In practice it will have the same benefits as a land tax – stopping capital gain and encouraging empty land to be built on. It will work out just as simple as a land tax but has the advantage of taxing all investments the equally. This will ensure that we start investing in businesses that create jobs and exports – stuff that can make us richer – instead of putting all our money into housing.

TOP doesn’t want to just tax capital gain in our housing market, we want to stop it completely. If we manage to do so for 15-20 years, houses may just about become affordable again.

Read our other policies here.