The Electoral Commission has this afternoon cleared The Opportunities Party (TOP) of any wrong doing in their campaign for the Mt Albert by-election after failing to uphold a complaint by David Seymour of ACT. 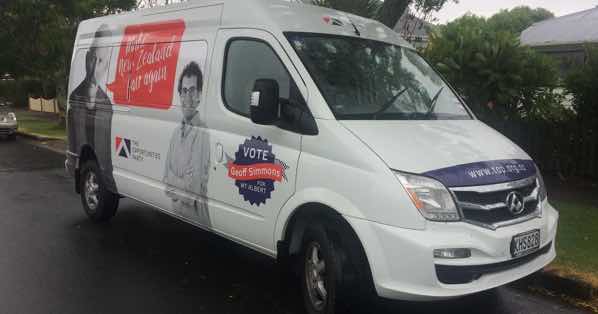 Mr Seymour had complained that TOP was using a sign-written van to influence voters by offering them rides.

“We were offering people a ride who had parked miles away. We had an empty 12-seater van. It was just common sense,” he said.

TOP Leader, Gareth Morgan, said it was typical of ACT to focus on nonsense.

“Every other major party is driving a massive coordinated effort and an army of volunteers to win Mt Albert. We drive a van and Seymour complains,” Morgan said. “He’s either trying to shoe horn himself into relevance or he’s really worried about The Opportunities Party. Probably both.”

Seymour had called TOPs actions ‘bribery’ and wanted the matter referred to the police.

Simmons said they’d love to give people more rides but ACT or some other ‘nanny state wowsers’ might give it another crack with the Electoral Commission.

“We’ll be out and about in the vans this week in a last push for Mt Albert. If you see us just give us a smile and a wave – sorry we can’t pick you up,” he said.

Simmons said feedback from passengers who took up the opportunity of a ride in an air conditioned van on a steaming Auckland day was that they had thought it was the decent thing to do.