The Opportunities Party (TOP) have proposed legalising and regulating cannabis on the one hand, and tightening the regulation of alcohol on the other. Liberals cheered our Real Deal Cannabis Reform, but have poo-pooed Real Action on Alcohol. Meanwhile social conservatives have had exactly the opposite reaction. Both are equally confused as to where The Opportunities Party ‘sits’ on the old ‘left-right’ continuum. They have both missed the point.

When you look at the evidence our position on both is entirely consistent. Welcome to the new world of politics folks; we are not left, not right, we are about what works. 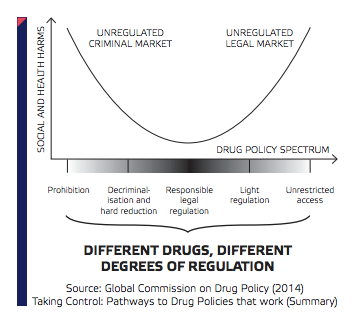 What the left hand side of the U shows is that an unregulated criminal market created by prohibition causes a lot of harm. It does this by forcing people to interact with gangs to get their drug, and with the criminal justice system for punishment. Those are the major harms we see with cannabis, rather than the impact of taking the drug itself.

The right hand side of the U shows that an unregulated legal market can cause just as much harm as prohibition. It does this through overconsumption leading to health problems – not just for the individual, but society in  general through accidents and injuries.

So if the goal is harm reduction (and it is for TOP and our members), the evidence based conclusion is that we need to tighten up on alcohol and loosen up on cannabis. Such a position isn’t contradictory at all.

Ah, freedom, now you are talking. The Opportunities Party are proud to champion freedom. But what is freedom actually?

Amartya Sen talks about development as freedom; true freedom is the ability to live up to your potential. This is the kind of freedom that The Opportunities Party champions. The freedom to be creative, curious and independent. The ability to choose your own direction, set your own goals and pursue success, whatever that means for you.

Any parent will know that true freedom is a lot more complicated than just letting your child do whatever they want. Sometimes this means making some difficult trade offs. Tax isn’t freedom, but the revenue gained allows us to invest in making sure all young people get a decent start in life. Alcohol regulation isn’t freedom, but neither is a wasted life from fetal alcohol syndrome, or violence, or the destruction of a developing brain by underage drinking, or a car crash.

The fact is, if we want people to reach their full potential, we should encourage young people to use neither cannabis nor alcohol until they are 25. Of course prohibition of both until 25 simply wouldn’t work. That is why TOP proposes a legal age for both cannabis and alcohol of 20 – to minimise the damage of both substances on a developing brain. That is also why we didn’t opt for a liberalised cannabis market ala Colorado.

In short, we disagree that true freedom means a complete free-for-all. That is why we have public sector-provided healthcare and education, and a welfare state.

And we would also note that we are raising the purchase age of alcohol. Technically there is no legal age for drinking alcohol. So there is still plenty of freedom there.

Not Left, Not Right, Just What Works

Of course, most politicians don’t think of the evidence, they think in sound bites. That is why the Health Minister backs our Real Action on Alcohol Policy but disagrees with us on cannabis. Likewise the Green Party agrees with us on the Real Deal Cannabis Reform but opposes us on alcohol.

This is just the same old game of poll-driven politicking, determining a position based on whether it appeals to their voting base. It certainly isn’t about showing leadership, or having an evidence-based discussion. If right and left were both actually interested in reducing harm, rather than playing politics, they would agree with both our alcohol and cannabis policies.

In the mean time, if you want politicians who take a consistent position, tick TOP.