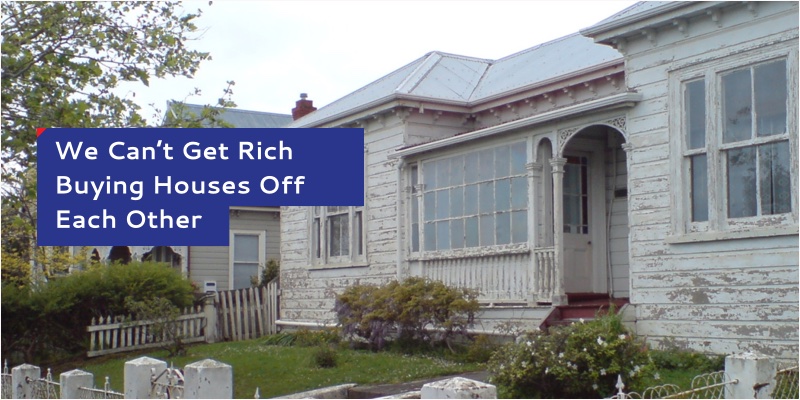 The answer most of us give will be housing, unless the potential alternative is a drop-dead certainty with huge upside. Why in hell would anyone leap through the regulatory hurdles, run the gauntlet of employment law and take the huge financial risk of starting your own business? Of course people do it, I have and I tip my hat to anyone else prepared to take the punt.

But let’s be honest, on average you’d be better off sticking it in housing. The bank will offer you far more leverage at far better rates if you stick the money into an investment property. Or even better, put all the cash into a bigger family home, and live like royalty rent-free. It’s a no brainer given the tax incentives that we face.

Then we wonder why we have spiraling land prices and ever-larger houses, while productive businesses are starved of the capital they need to start and grow. We scratch our heads at why so many of our businesses end up being sold to overseas investors with much deeper pockets. We suck in our breath every time we hear of New Zealand’s ballooning private debt and our dependence on foreign borrowing.

All of these problems have the same root cause; ever since the late 1980s our tax system has had glaring loopholes. We created a broad base, low rate tax system to ensure there were minimal distortions; with the sole exception of the treatment of non-cash returns on assets.

Now that loophole has grown into a millstone around the neck of our economy. New Zealand’s treatment of housing is probably the most distortionary in the developed world. As a result it should come as no surprise that housing makes up the bulk of our assets, and that the growth in the ratio of house prices to incomes has topped the OECD over the last few years.

Closing this loophole is relatively easy, but appears to have been beyond the comprehension and/or political will of our Establishment politicians since the late 1980s. Housing has been viewed as sacrosanct, and so it continues to retain its tax-free status. And so we keep throwing all our money at it.

But we simply can’t get rich as a nation by buying houses off each other. According to international statistics New Zealand is the 5th richest nation in the world. Yet when it comes to income we languish at 30th. What does that tell you? It tells me that our investment performance is laughably poor. We are terrible at turning wealth into income.

Isn’t that the point of having assets; to turn them into income, to use them to either generate cash or to simply make our lives easier? Here’s the kicker – assets that make our lives easier by generating non cash returns are just as valuable to us as assets that generate cash returns. Yet under the current tax system we treat them completely differently. So where do you put your money?

Our tax system favours investment in assets that generate non-cash returns. So that is where we put our money. Then we are amazed that our assets generate such a crap return.

Other countries at least attempt to skew the tax system so all assets are on a level playing field. They do this in a myriad of complex and imperfect ways, but they generally succeed in encouraging investment in productive business. That is why some countries like Germany have successful economies without rampant housing markets.

Our tax reform is a far more efficient way of closing this loophole than anything we have seen overseas. If implemented it would cool house prices and drive investment towards productive uses. Businesses would benefit, as would wage and salary earners. Those that don’t benefit can well afford it.