Troy Bowker raised some alarmist views about possible changes to the way we tax assets, calling it “concerning and ill-conceived” and fretting about the future of the Kiwi bach. He is referring to the risk free rate of return method, which is being explored by the Tax Working Group and is similar to the tax policy put forward by The Opportunities Party at the last election.

Let’s start with the big picture facts that Troy was so quick to overlook.

In this country wage and salary earners and those who invest in productive businesses pay too much tax. Around one third too much. That’s about $11 billion too much tax.

The owners of property and property related businesses often pay too little. You guessed it, about $11 billion too little. You can see this discrepancy in the Tax Working Group’s graph below: 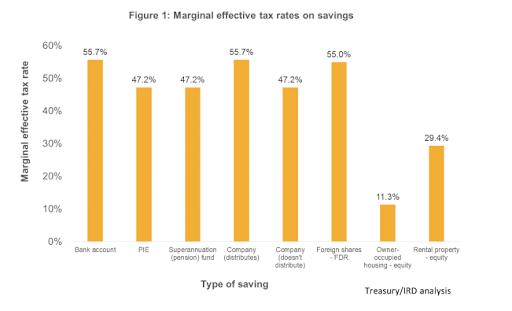 This isn’t about collecting more tax, or making any sort of tax grab. The Opportunities Party wants to collect the same amount of tax as we collect now, just in a fairer way.

This tax distortion is driving all sorts of perverse outcomes. New Zealand has the highest level of investment in housing in the developed world. No surprise that in recent decades we have also had the highest increase in house prices.

This is great for property owners, but really bad news for everyone else. Our businesses are starved of capital, and as a result our productivity is poor. Housing is now unaffordable in our major cities. Inequality has been rising and when housing costs are included our poorest citizens are going backwards.

The risk free rate of return method (the catchy title is courtesy of the Tax Working Group) proposes that all assets pay at least as much tax as a bank deposit.

And why not? If you weren’t getting as much value out of the asset as having it in the bank, why wouldn’t you put the money in the bank and live off the interest? Sounds fair to me.

Instead of speculating on land prices as we do now, the risk free rate method will shunt Kiwis to start putting their money into productive assets that can make us all wealthier. There is simply no other reform that would improve our economy AND reduce inequality at the same time.

Such a change would mean people get rewarded for hard work, rather than speculation. Isn’t that the sort of country we want to live in? It would also encourage people to use their investments more productively. In the case of baches, this would be a great thing. It is a real shame to see once charming seaside towns filled with McMansions that sit empty for 10 months of the year.

Currently the only alternative tax reform to the risk free rate of return method is a capital gains tax (CGT). We know that a CGT would hammer businesses and discourage important sales of homes and businesses, all while making very little difference to eye-wateringly high house prices.

The only thing CGT has going for it is political - people understand it. It won’t solve the problem, and could very well make matters worse. And that is before we start talking about the mess that the family home exemption will create.

If we want to solve our nation’s problems, bold change will be required. The only question is whether you prefer bold change now, or extreme change later as we are seeing with Trump and Brexit. At some stage younger generations will tire of paying all the bills.

Bowker’s article talks about taking away the Kiwi dream. But we have to ask ourselves, is the Kiwi dream still owning a bach or simply feeding our kids? Around 40% of our country owns nothing, let alone a bach. Time to get some perspective.