Our democracy is a fragile thing. We know that disillusion with it is on the rise, that a growing swathe of voters feel so disempowered that they’re driven to not participate, to turn down their opportunity to shape the next government or to ensure governments are accountable to the whole citizenry. Democracy starts to fail once voter participation slides and in New Zealand it’s been sliding for 30 years now. 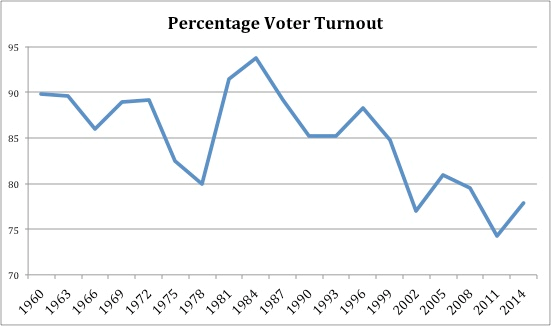 Apparently right now in New Zealand, the Millennials (and to an extent Generation X) just don’t care about our so-called democracy. Their poor enrolment numbers speak volumes, reflecting their view that in New Zealand the democratic process serves elites and the oldies. But the result of such disengagement is that the hegemony from that section of the electorate they resent gets stronger. Staying engaged in the democratic process is critical, all voices must be heard for democracy to function. Otherwise we get a succession of governments that serve the interests of a single constituency but to the exclusion of the interests of the public as a whole. With that type of behaviour the alienation gets worse and in the end there is a dramatic backlash.

Both the US and the UK have now experienced this – while in New Zealand there is no sign yet of a halt to the slide in voter participation. The Opportunities Party has looked at these issues and at what may halt the democratic decay that besets political governance in New Zealand. Amongst our objectives is a written constitution, a constitutional authority that checks parliament’s legislative programme against the constitution, civics education, and a greater role for deliberative or direct democracy to bolster the representative democracy that is our political foundation.

So against this backdrop of democracy at risk, it’s disappointing to see the Establishment parties manipulating voter behaviour in an effort to game our MMP system to their own ends. While perfectly legal, the ethical grounds for running interference on voters’ triennial opportunity to directly express their political preference are dodgy. Bill English stepped up to the plate on behalf of National last week to do just that.

While referring to his guidance of the voters of Ohariu and Epsom as “tactical voting” the reality is that Mr English’s call for voters to sacrifice their electoral vote for the greater interest of the party for whom their list vote is cast, is grubby. In essence what he’s saying is – “we think you should forgo your right to vote for the best candidate for your electorate and instead help us gain power at the national level. So could you please vote for someone whose values you may well despise, because by doing so they will get more representation at the national level, and assist us hold on to power.”

The 2012 review of MMP by the Electoral Commission recommended the removal of this coat tailing rule (where if you get one electorate seat plus more than 0.8% of the vote you get another MP). The rationale is to remove the gaming by politicians and protect the integrity of a voter’s electorate and list vote.

In the words of the Commission;

“The main objection to the one electorate seat threshold is that it runs counter to some of the most fundamental principles of the MMP voting system, including that all votes should be of equal value, the primacy of the party vote in determining election outcomes, and fairness of results. Because it undermines these core principles, the Commission is concerned that if the one electorate seat threshold is retained there will be a considerable on-going risk to public confidence in the legitimacy of our system of MMP.”

There you have it, it’s unethical. But the politicians of ACT, National, United Future and the Maori Party – those parties who are benefiting from coat-tailing, decided to vote down the Commission’s recommended change and to continue the “on-going risk to public confidence in the legitimacy” of our democracy.

A person’s right to have their vote reflect their preference is the cornerstone of democracy. If it’s allowed to be contaminated by the self-interest of ambitious politicians that integrity is lost. Any election result no longer reflects the balance of the population’s preferences for local and national representation.  If our democracy is to be as strong as we can make it then the right of people to vote on their principles must be beyond interference from politicians. This tenet should lie at the very core of our Constitution. It’s hard enough to get a democratic election to reflect the balance of the whole population’s preferences anyway – given more and more are not voting – without politicians manipulating the process for their party political ambitions.

Gaming the voting process is the epitome of tribal, partisan politics which delivers us mediocre Establishment party governments that represent sector constituencies only and increasingly have been failing to work in the interests of all voters. Mr English calls this “stable” government, I call it stagnant, mediocre and unenlightened. It’s precisely this type of behaviour from Establishment parties that is alienating so many voters from the democratic process and to be frank, putting our democracy at risk.

In short such gaming needs to be removed, the interference that Bill English & Co are running should be no more legitimate than it is for someone to pay voters to vote a certain way (which obviously is illegal). The non-partisan Electoral Commission was right, the gaming being undertaken is immoral and an insult to the public.