HOUSING & URBAN DEVELOPMENT – A change in the wind

By Brendon Monk (TOP spokesperson for Housing and Urban Development)

This government formed a Ministry of Housing and Urban Development, which has been long overdue in NZ. The Ministry is responsible for leadership in the housing and urban system, and advising the Government on strategic direction. Overall a great move. TOP’s stance was always that if we are serious about fixing our housing crisis, then we must deal with both housing and urban development together. Ideally, this ministerial portfolio would be overseen by one Minister given how interlinked they are. Unfortunately the Government has seen it necessary to split off the housing side again to a separate Minister. This is perhaps due to the abysmal KiwiBuild failure. TOP thinks the Minister of Housing and Urban Development should be expert enough in both fields to keep the portfolios together.

Kāinga Ora – Homes and Communities (Kāinga Ora), formed in October last year, took over as the Government’s primary housing and urban development delivery unit. Kāinga Ora is a more coordinated approach to social housing developments in better locations. There is nothing much to show for it yet, but it is early days, and I expect some positive results based on some designs I have seen. TOP’s policy would see this go much further in terms of placing more trust in local communities to build and own social/community housing on Kāinga Ora land.  TOP believe in setting the expectation at the highest level, providing the resources, then having a bottom-up not top-down approach. Tautoko grassroots action in local communities, because they know what they need, and they know how to transform if given the resources. In a sense, the Government should respond to the communities. TOP also want to explore other ownership models such as cooperative housing and address the need to modernise the Unit Titles Act and fix issues around banking funding to co-housing models.

In December 2019, the Government introduced the Urban Development Bill, which has just moved into Royal Assent. This provides Kāinga Ora with some very strong powers, including; the ability to enable, lead or facilitate a special type of complex transformational development – called 'specified development projects' (SDPs); access certain development powers when undertaking SDPs, including major infrastructure changes; and access to land acquisition powers. Kāinga Ora can override the Resource Management Plans Act as its own planning consent authority. It does use a design review process for this which is very similar to what TOP’s policy proposes. This consenting system based on design review is more positive than the current RMA based system. Under TOP’s Urban Development Act proposal all developers would have access to this positive system for faster better outcomes, not only Kāinga Ora.

The National Policy Statement on Urban Development (NPS-UD), just released, replaces the previous NPS 2016. Overall this is a welcome piece of legislation. It is a positive move for our city development. Whilst the most reported tidbit in media has been to say this NPS-UD removes minimum carparking requirements in city centres, it indeed does a lot more than that. It directs local authorities to enable greater supply and ensure that planning is responsive to changes in demand. It also requires councils to remove overly restrictive rules that affect urban development outcomes in our cities. In short, it allows for more intensification of city centres. The policy divides our cities into Tier 1, 2, and 3 urban environments with different policy statements for each. The ministry is starting to move in the direction of a more positive “spacial planning” approach. In basic terms this means considering things like building the right sort of developments to ensure people can live closer to work, amenities, public transport etc, rather than just designing around simple and restrictive zone rules.

This is where TOP’s view of policy on Housing and Urban Development differs from the Governments approach, which still amounts to tinkering with a broken system. If we want our children and grandchildren to have a positive future, we must get serious about the big picture of sustainability from every standpoint. An easy to understand definition of sustainable behaviour is as follows.

“Developing sustainably means developing in a way that meets our current generation’s needs without compromising the ability of future generations to meet their needs.”

This simple definition means dealing with the challenge of climate change and moving to net zero-carbon emissions. This aim can and should be applied at the highest level of our legislation. The key words in the definition above being “future generations”.

TOP already propose a introducing a written Constitution to address this fundamental principle. Under this constitutional umbrella would sit all other legislation. For the environmental wing of legislation, TOP will introduce three new fit-for-purpose Acts to replace the current RMA. These are an Urban Development Act, Lands Act, and Oceans Act. The way we need to manage these three areas is so different that to do it effectively and put in place long term (30+ year) strategies requires completely unique legislation with distinct boundaries between them. Really firming up our rural-urban boundaries for example. This is illustrated in the diagram below. 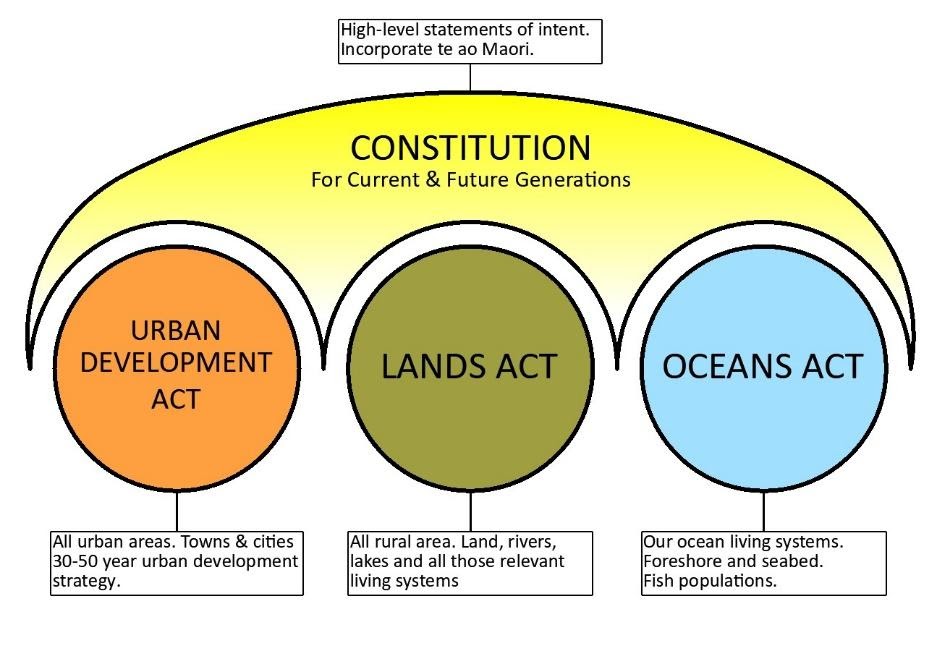 Our cities are major consumers of energy and producers of carbon emissions. By 2050, the city is projected to be home to 70% of the world’s population. This is while we need to become carbon-neutral to avoid catastrophic change in our environment. How we design our cities is therefore critical and urgent. On a positive note, city design therefore has the potential to be the major tool in helping us avert disastrous climate change.

This challenge requires nothing less than a ground up approach to new legislation for urban development. TOP’s Urban Development Act will be much more than just an add-on to the current RMA.

For our cities to mature in a sustainable way (build up not out), getting our infrastructure up to scratch to meet the challenge is perhaps the first and biggest step. The Government introduced The Housing Infrastructure Fund which was a one-off contestable $1 billion fund that provided 10-year interest-free loans to high-growth councils. The funds were provided for core infrastructure to support housing development and increase housing supply. I give it points for at least knowing there is a major shortfall in local government infrastructure funding, but otherwise it was a bit of a joke compared to TOP’s solution.

Due to both the effects of Covid19 on our economy, and it being an election year, we are seeing huge sums of money being flaunted by both major parties now in the name of vote buying, I mean infrastructure upgrades. Be it for a bunch of big “shovel ready” projects as the Government is doing, or simply to build roads for Africa as National are proposing. Again, we must go back to the overarching big picture of sustainability and climate change before jumping in too quick here. In some cases, we may be talking about an actual managed retreat of certain towns and cities from the coast. TOP know we must prioritise sustainable infrastructure that will give the highest overall return on investment (ROI) for our 30+ year urban development strategy. This is perhaps a once in a generation chance here.

Both parties are essentially planning to borrow for this massive spend up. If the ROI is acceptable, this is not a bad thing maybe, but it is future generations who will be paying for this remember. TOP have a better solution to the funding issue, both in the short-term boost required and for long term sustainability of funding.

TOP’s UBI policy makes NZ superannuation sustainable. Therefore, if that UBI policy is adopted, we have the option of using the existing NZ Superfund as an alternative to borrowing. As of July 2020, the balance of the superfund was sitting at $45bn. TOP will ensure that the type of projects this money goes toward will have a long-term ROI that meets the sustainable goals of both TOP’s proposed constitution and TOP’s Urban Development Act.

Everyone wants our regions to thrive. TOP will ensure local governments get the operating revenue for infrastructure they need to play their part.

The elephant in the room

The Housing and Urban development related issues and solutions above are all on the “supply” side of the equation. But there is also a “demand” side in urgent need of attention. Again, if we are serious about fixing our housing crisis and improving the design of our cities, we must address the major demand side distorter that is driving up land prices. Every TOP supporter knows I am talking about our tax system. The Government, and in fact no other political party than TOP are even pretending to address this. Their heads are well and truly in the sand, or at least publicly.

Housing in New Zealand benefits from the greatest tax advantage for any investment of any country in the OECD. Until our tax base is evened out, Kiwis will continue to put more money in housing than any other country and we will continue to have the highest house and land prices. There is already daylight between NZ and the second worst country in the OECD. We cannot achieve quality urban outcomes when the cost of land is out of control.

Successive governments have attempted to address declining home ownership by subsidising first-home buyers. This is just populist policy. Given it is essentially fuelling the bottom of a giant pyramid scheme, it is essentially fighting fire with petrol. How do you build a successful city on that?

The fundamental difference between the current system and TOP’s approach is that our tax reform will discourage land-banking for capital gain and shift investment out of property into productive areas of the economy.

Gradually introducing this asset tax (and introducing a universal basic income) will profoundly change the property-ladder mentality. House prices will hold steady while wages increase, meaning housing will become more affordable. In our view, the long-term gains for equality cannot be overstated.

The Government is moving urban development in the right direction, but there needs to be both a step back to look at the big picture of where we are heading, and a step sideways to start dealing with both sides of the housing and urban development equation. We need to remove the distortion in our demand before we can build our way out of the mess and toward a brighter future for younger generations.